Miscues, rare mistakes lead to another loss for Ole Miss 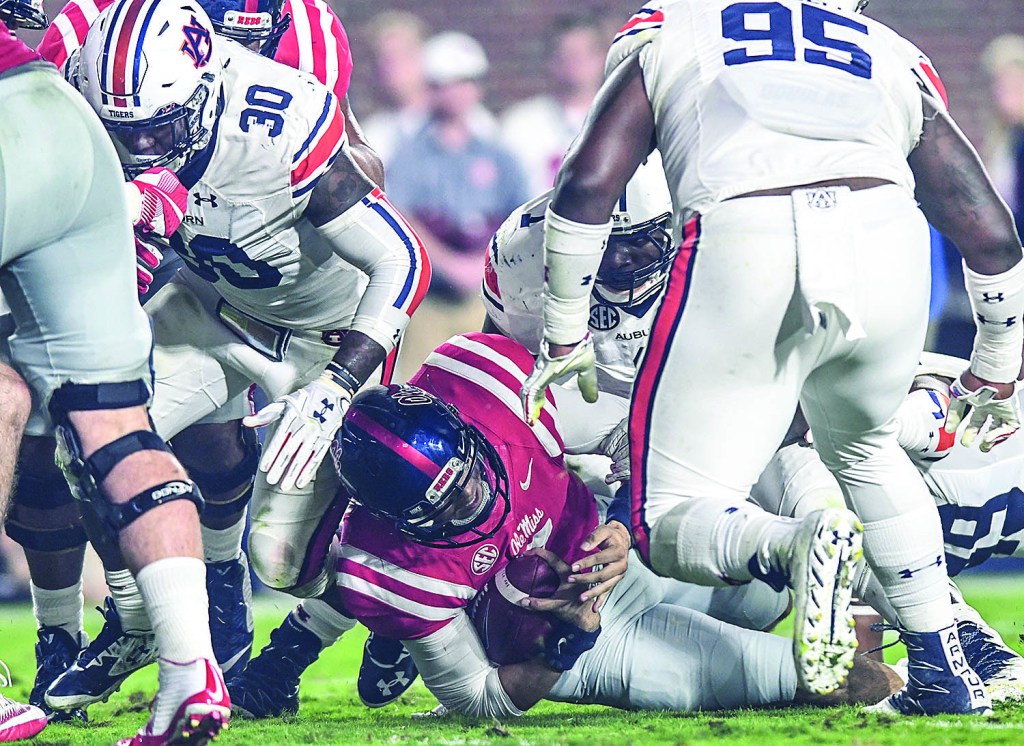 Mississippi Rebels quarterback Jason Pellerin (7) is stopped near a first down by Auburn at Vaught-Hemingway Stadium in Oxford, Miss. on Saturday, October 29, 2016. (Bruce Newman, Oxford Eagle via AP)

If Ole Miss’ season could be defined in a few ways, one would obviously be the lack of defensive effort and another could be miscues on the offensive end that might have turned a game’s result in the favor of the Rebels.

Saturday’s game was an example of the latter.

Several times Ole Miss was moving the ball down field, and several times they got in their own way. Yes, the offense piled up 570 total yards of offense and seemed to have their way with a stout Auburn defense. But there were times where times where Ole Miss could not complete a drive, which has become an issue.

The first miscue came after Kelly drove the offense down the field on their opening drive but place kicker Gary Wunderlich had his extra point attempt blocked by Auburn’s Montravius Adams to make it a 6-0 lead instead of 7-0.

After holding Auburn to a punt on their opening drive in the second half, Ole Miss started on their own 22 and made it inside the Auburn five-yard line. After being unable to punch it in, Kelly was replaced by Jason Pellerin on a 4 &1 at the Tigers three-yard line. Pellerin was stuffed and Ole Miss turned the ball over on downs, snuffing a successful third quarter drive, which had been hard to come by for Ole Miss in the past couple games.

“That’s up to the coaches. I’m just out there trying to do my job,” Kelly said when asked if he felt it should have been him on the field instead of Pellerin on the fourth down play.

Perhaps the biggest miscue of the night was one that resulted in a 14-point swing.

With Ole Miss driving and trailing Auburn 33-29 late in the fourth quarter, Kelly found a wide open Evan Engram, who was having a record-breaking night up to that point, and it was looking to be a touchdown, or a big gain at most but Engram dropped the sure catch. The very next play Kelly tosses an interception to Auburn’s Joshua Holsey who returned it 47 yards. The Tiger’s Kerryon Johnson would punch it in from three-yards out four plays later for the dagger and the winning margin.

“I thought we were moving it almost at will against one the better defenses in the country,” offensive coordinator Dan Warner said. “Nobody else has put up those kinds of yards or points against them. So, I was pleased with the way we played besides a couple plays. You change two plays, the game is probably different.”