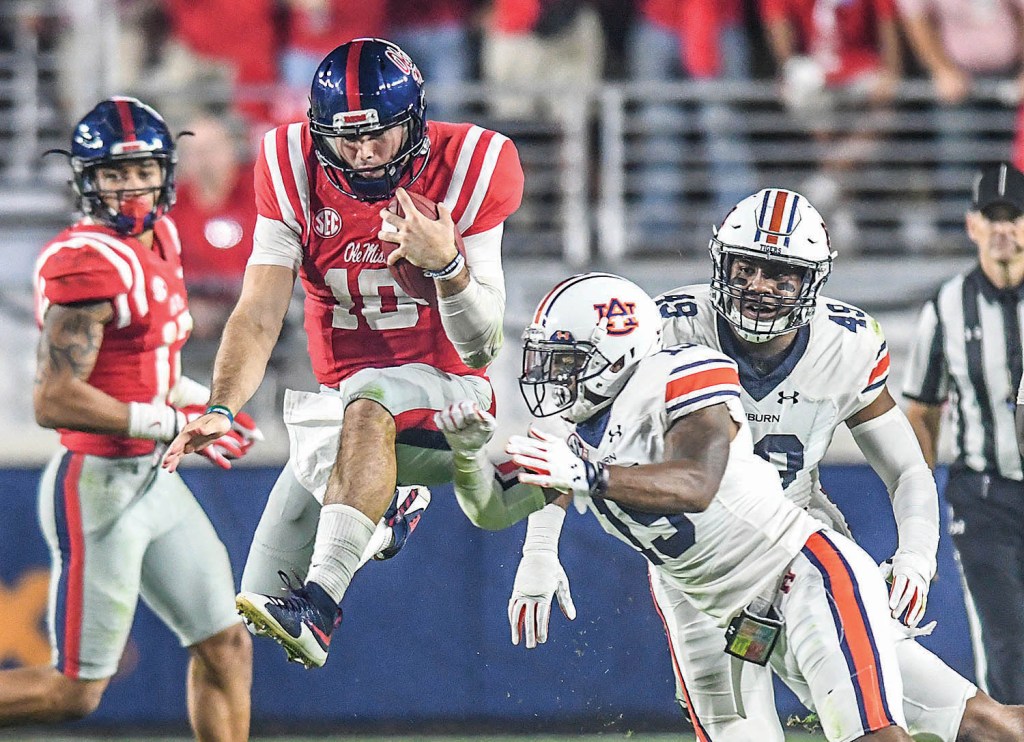 Ole Miss quarterback Chad Kelly was terrific. Like most weeks, the other side of the ball wasn’t.

The Rebels went back and forth with No. 15 Auburn but combined more poor defense with some key miscues in a 40-29 loss Saturday in front of 65,927 fans at Vaught-Hemingway Stadium. The Rebels have lost three straight for the first time since 2013.

Kelly threw for a school-record 465 yards and three touchdowns. Evan Engram finished with nine catches for 95 yards while Quincy Adeboyejo had four catches for 76 yards in a game that featured 1,124 yards of offense and no punts until the second half.

Engram dropped what likely would’ve been another score deep in Auburn territory with the Rebels trailing 33-29 midway through the fourth quarter, and Kelly was intercepted by Josh Holsey on the next play. The Tigers (6-2, 4-1 Southeastern Conference), who rolled up 554 yards, took their biggest lead three plays later on Kerryon Johnson’s 3-yard touchdown run.

Said Ole Miss coach Hugh Freeze, “That’s the season we’re having right now. We have to make every play or it’s tough for us to win against the caliber of teams we’re playing right now.”

The lead changed hands nine times. Auburn gashed the nation’s 113th-ranked run defense for 307 rushing yards with 236 of those coming from Kamryn Pettway on 30 attempts. Pettway had one touchdown while Johnson, who added 42 yards on 11 carries, scored twice.

“There is an issue there,” Freeze said of the run defense. “It is either the people or the process. It is my job to try to figure it out. Is it a combination? Is it the people? Will recruiting fix it? Do we need to work on our communication? I assure you there is no give-up on this staff or on us trying to address it.”

Sean White threw for 247 yards and a score for the Tigers, but most of the fireworks through the air came from Kelly, who had 297 yards passing at the half and consistently carved up an Auburn defense that came in ranked in the top 5 in the SEC in scoring defense, total defense, rush defense and pass defense. His final touchdown toss went 10 yards to Damore’ea Stringfellow to put Ole Miss (3-5, 1-4) up 29-27 late in the third quarter.

“I felt comfortable out there, but we left a lot of stuff still out there,” Kelly said. “We can still get better. I know our guys are just going to keep on fighting.”

But Auburn went 63 yards in 10 plays on its next possession and took the lead for good on Daniel Carlson’s 30-yard field goal, and the Rebels were shut out in the fourth quarter for the second straight week. Carlson and Gary Wunderlich combined for seven field goals.

The teams combined for nine possessions in the first half and scored points on all of them. The lead changed sides six times in the first two quarters with the Rebels having 16 points — two more than the Tigers allowed per game coming in — early in the second quarter. A 26-yard field goal from Wunderlich put Ole Miss up 22-20 at the half.

“We’ve just got to keep staying positive and move forward from here on out,” defensive end Marquis Haynes said.