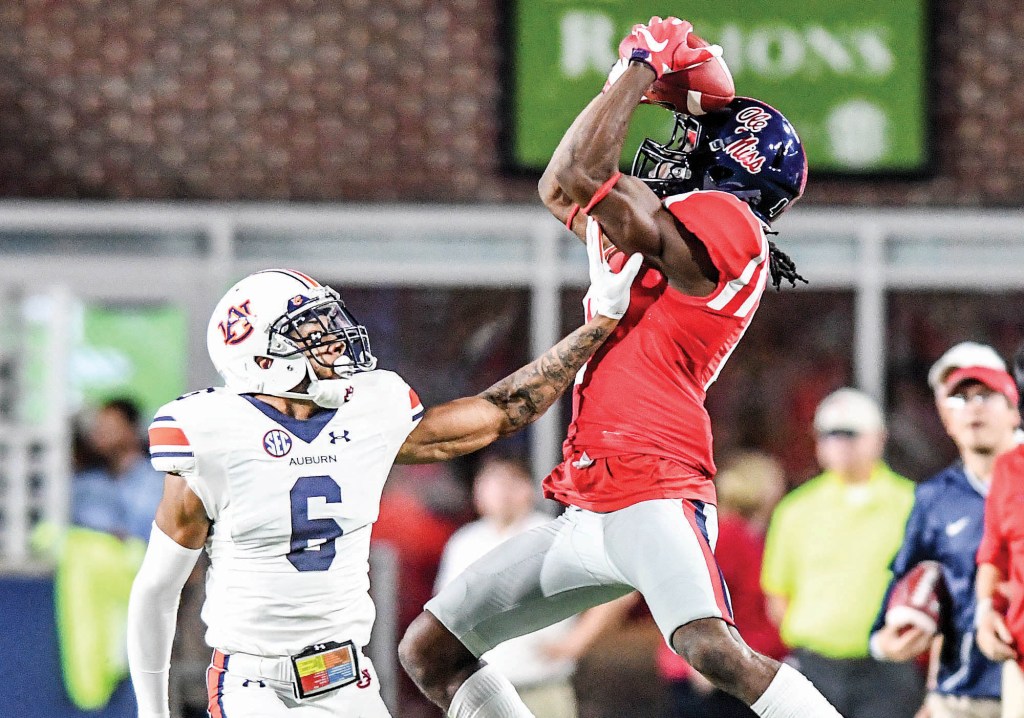 Kelly’s fourth-down pass is incomplete, and that may do it. Auburn takes over up 11 with 5 minutes left.

Engram, who’s got eight catches for 77 yards and a score, drops a would-be touchdown deep in Auburn territory. Kelly is picked off on the next play, and Auburn turns it into points three plays later on Johnson’s 3-yard touchdown run. Auburn has its biggest lead late. Auburn 40, Ole Miss 29, 5:58 4Q

Ole Miss forces Auburn to punt — the first for either team tonight — and again takes the ball deep into Auburn territory. But Jason Pellerin is stuffed for no gain on a fourth-down run. Auburn takes over at its own 4.

Ole Miss gets into Auburn territory but bogs down. Wunderlich adds another field goal, this one from 49 yards out — a career long. Ole Miss 19, Auburn 17, 7:10 2Q

END OF FIRST QUARTER: Ole Miss 13, Auburn 10. Rebels will have it second and goal at Auburn’s 5-yard line to start the second.

Ole Miss is the first team to get a third-down stop tonight, but the Tigers cut into the Rebels’ lead on Daniel Carlsonn’ 45-yard field goal. The teams are a combined 6 of 7 on third down. Ole Miss 13, Auburn 10, 1:50 1Q

It continues to go back and forth with Ole Miss answering on Kelly’s 26-yard touchdown pass to DaMarkus Lodge. Rebels already with 158 yards of offense. Engram already with five catches. Ole Miss 13, Auburn 7, 5:36 1Q

Auburn goes 90 yard in nine plays to respond on Kamryn Pettway’s 41-yard touchdown run. Pettway looked to be bottled up until breaking through the line. The Tigers ran it seven times. Auburn 7, Ole Miss 6, 7:27 1Q

Auburn wins the kickoff, defers to the second half. Ole Miss will start on offense.

Ole Miss announced Greg Little as the starter at left tackle. It will be the first start of his career. Also Alex Givens is getting the start at right tackle, and Sean Rawlings will start at center.

Tayler Polk and Willie Hibbler were announced as the starters at linebacker.

Auburn is one of the hottest teams in the Southeastern Conference while Ole Miss’ season is teetering on the edge of complete disaster.

We will have live updates here this evening of the Ole Miss vs. Auburn game from Oxford. Bookmark this page and check back at game time to follow for Ole Miss, Auburn live score updates and analysis.

Auburn coach Gus Malzahn is certainly pleased about the way the 15th-ranked Tigers (5-2, 3-1 SEC) have played during their current four-game winning streak, but he’s also guarding against overconfidence as his team prepares for a road game against the Rebels (3-4, 1-3) on Saturday.

“You are talking about an Ole Miss team that’s really talented,” Malzahn said. “I told our guys, ‘Don’t let that record deceive you. They’re one of the top groups in our league.’ In this league it doesn’t matter who it is, anybody can beat anybody.”

Part of the reason for Malzahn’s respect for Ole Miss is his respect for their coach. Malzahn and Hugh Freeze have been friends since their days as high school coaches when they’d cross paths at coaching clinics.

Now they’re both established in the SEC and have a reputation for innovative spread offenses that can pile up points in a hurry. That doesn’t mean they’re completely the same: While Auburn’s spread has a heavy rushing component, Ole Miss is better at moving the football through the air.

Freeze said it will be a huge challenge to stop Auburn’s running game that racked up 543 yards in an impressive 56-3 victory over Arkansas last weekend.

“I think they are really talented to begin with and they have a good system that really makes you defend the entire field,” Freeze said. “They have quality in their backs and their offensive line and they’ve committed to it.”

Ole Miss is trying to snap a two-game skid that includes lopsided losses to Arkansas and LSU.

Some other things to watch when Auburn travels to Ole Miss on Saturday:

STOPPING THE RUN: Freeze has good reason to be worried about Auburn’s potent running game because Ole Miss is the worst in the SEC at stopping the run, giving up about 226 yards per game. Much of the blame has fallen on the linebackers, who the defensive coaches have constantly shuffled as they’ve tried to find a group that is effective.

KERRYON’S BACK: Auburn tailback Kerryon Johnson returns from an ankle injury that sidelined him against Arkansas and most of the Mississippi State game, when he was hurt early. “He will play this Saturday,” Malzahn said. “There’s no doubt about that.” Without him, 240-pounder Kamryn Pettway has carried 66 times for 361 yards and five touchdowns in the past two games.

SECOND HALF BLUES: Ole Miss has a 3-4 record this season despite never trailing at halftime. The Rebels have been outscored 139-87 after halftime. The biggest problem is in the third quarter — opponents have a 78-34 advantage.

STOPPING KELLY: With the help of a much improved pass rush, Auburn ranks third in the SEC in pass defense and has given up just six touchdowns through the air. Ole Miss quarterback Chad Kelly presents a huge challenge as the league’s top passer in yards per game. “It’s definitely a different challenge knowing that they’ll take shots no matter how good the coverage is,” Auburn cornerback Carlton Davis said. “But I see it as an opportunity for me to make something out of it. That’s really a good thing for me when quarterbacks have a lot of confidence in their receivers. It just allows me to make plays and play my brand of football.”

RECENT HISTORY: This is the first Ole Miss-Auburn game in Oxford since 2014, when the Tigers won 35-31. The game was especially hard for Ole Miss, which lost star receiver Laquon Treadwell late in the game to a gruesome broken ankle as he was trying to score the go-ahead touchdown late in the game.