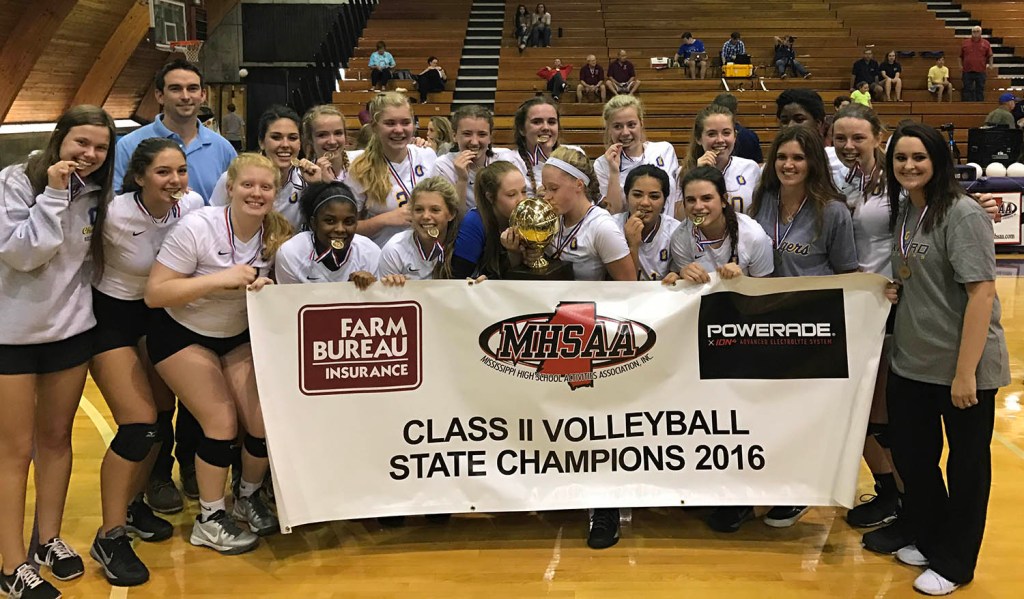 Oxford High's volleyball teams celebrates with their Class II state trophy after defeating Lewisburg 3-0 at Millsaps College on Saturday. It was the Chargers first volleyball title in 18 years.

JACKSON — To be the best, you have to beat the best. A motto uttered by the ‘Nature Boy’ himself, Ric Flair.

Well, there is a new best at the top of the mountain in Mississippi Class II high school volleyball as Oxford knocked off two-time defending champions Lewisburg in straight sets with a 3-0 (25-11, 25-19, 25-15)  victory on the campus of Millsaps College on Saturday afternoon.

The win ended an 18-year drought for Oxford volleyball as it was the first state championship since 1998, when the Chargers went undefeated.

“We’ve said from Day 1 that this is where we should be,” Oxford head coach Tara Ross said. “This is our goal. I would have totally disappointed if we hadn’t won it. We came here, we won it. These girls have worked so hard.”

Saturday was the third meeting between Oxford (30-7) and Lewisburg (26-13), with Oxford having taken the first two matches in the season. The Aug. 30 win ended a 10-year drought over the Patriots. Saturday’s win completed a season sweep over a Lewisburg team that had won three of the last four state titles and perennially considered a heavyweight in high school volleyball.

“I can’t explain how I feel right now,” Oxford senior Maggee Hobson said. “I’m so pumped for my team. …I think that we are one. We played so much as a team to beat (Lewisburg) and knock them off. It says so much about our talent. We have so much talent.”

From the opening serve, Oxford made their intentions known of how they wanted the match to go, jumping out to a 20-8 lead in Set 1 and finished it off for the 1-0 lead over Lewisburg.

The second set went much differently as Lewiburg did not let the opening frame change their plan of attack. The Chargers stared a 7-1 deficit in the face. Oxford shook off the slow start and used a 24-12 rally to claim the second set and a 2-0 lead.

“That was one of our biggest goals this year, being mentally tough,” Ross said. “They’ve done that. That’s just what they are. They are just an amazing team.”

Oxford got off to a sluggish start to being the third set but rallied to tie it 9-9 before taking the lead the very next point and never relinquished it to claim the championship.

Oxford’s march to the state championship came with little to no resistance. The Chargers dropped only one set, coming in their 3-1 first round win over Lafayette on Oct. 18. From the second round on, Oxford won in straight sets.

“You hate to assume things, but you would assume just how we played in the postseason (that we would win),” Ross said. “We’re good. We are. We should be here. There’s no quirks about it. I really do think that we are the best of the best.”

On Saturday, Oxford was the best.