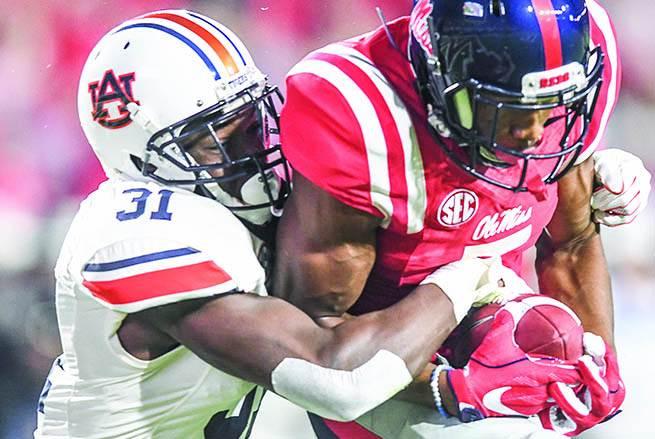 A 40-29 loss to Auburn on Saturday was the Rebels’ third straight setback, their longest losing streak since 2013. It also dropped Ole Miss two games under .500 for the first time in the Hugh Freeze era.

It’s got a team that once believed it could compete for championships now needing a bunch of wins in the season’s final month if it wants to play beyond the Egg Bowl. Ole Miss (3-5, 1-4 Southeastern Conference) needs wins in three of its last four games to go to a fifth straight bowl under Freeze.

With everything else off the table, Freeze said the objective is simple as the Rebels try to salvage what’s left of an underachieving season.

“My goal is to get the (players) that are healthy and can play to be ready to go to get 1-0 next week,” Freeze said.

Ole Miss will start November by stepping out of the SEC on Saturday for a matchup with Georgia Southern (11 a.m., ESPNU). Trips to Texas A&M and Vanderbilt follow with the Rebels ending the regular season at home against Mississippi State. If nothing else, the sheer frustration of the mounting losses is enough of a reason to keep the Rebels from packing it in.

“I hate losing more than anything,” quarterback Chad Kelly said. “We’ve just got to keep fighting. I just want to win. That’s all (my teammates) want to do is win, too. We don’t care about anything else except winning.”

Georgia Southern can’t be taken lightly, not with the deficiencies Ole Miss has on defense. The Eagles’ option offense could create even more problems for a defense that’s having all kinds of trouble stopping anything on the ground and even getting lined up correctly at times.

The Rebels went with yet another different starting linebacker combination against Auburn in freshman Willie Hibbler and walk-on Tayler Polk, but it didn’t matter. The Tigers ran for 307 yards against a defense that’s now 118th nationally against the run and piled up 554 yards in all, making Kelly’s school-record 465 passing yards all for naught.

Freeze particularly wants more success down the stretch for this senior class, which includes Kelly, record-setting tight Evan Engram, Tony Conner, Issac Gross and others who’ve helped the Rebels increase their win total each of the previous four seasons.

That won’t come close to happening this year, but the Rebels want to win as many as possible.

“These seniors deserve to go out of here known as fighters and a group that helped changed the culture of this program,” Freeze said. “That’s what they deserve, and that’s what we’re going to fight to make sure they get.”