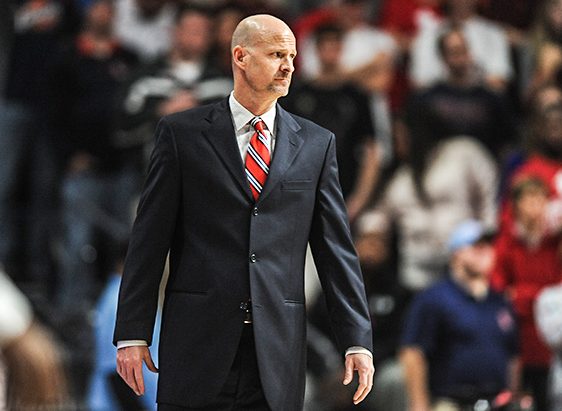 Andy Kennedy insists he hasn’t decided on a starting five. Even if he has or even if he does between now and the Rebels’ season opener against Tennessee-Martin on Nov. 11, Ole Miss’ men’s basketball coach will keep it to himself.

“I won’t be very open with that,” Kennedy said with a smile. “I will channel my inner (Patriots coach Bill) Belichick as we approach Game 1.”

But weeks of practice and a recent scrimmage have given Kennedy a better idea of what he’s working with this season.

Whether it’s been Marshall Henderson or Stefan Mooday, Ole Miss has been heavily dependent on its guards to do a majority of the scoring in recent years, but Kennedy has brought in more size that he hopes can help even out that distribution. Senior forward Sebastian Saiz, at 6-foot-9, was the tallest player on the roster a season ago but is matched or exceeded in height this year by freshmen Nate Morris (6-9) and Karlis Silins (6-11) and Drake transfer Dominik Olejniczak, a 7-footer who will sit out this season per NCAA transfer rules.

“Last year, (Saiz) was our only real post presence,” senior guard Rasheed Brooks said. “Now we’ve got a couple guys that are bigger than Sebas.”

Guard transfers Deandre Burnett (Miami) and Cullen Neal (New Mexico) will be counted on to score their share of points, but the increased girth has shown up in the Rebels’ play this preseason. Ole Miss used its numbers and physicality on Sunday to win a controlled scrimmage against Arkansas-Little Rock, a team that won 30 games a season ago and upset Purdue in the first round of the NCAA Tournament.

“I don’t think there is a big separation between No. 1 and 8 (in the rotation), which depending on your perspective could be good or bad,” Kennedy said. “But I think the quality of our depth is much better. I think we are much more physical. We have bigger bodies this year.

“I have a pretty good feel for what we are dealing with right now.”

The offense was better during spurts in the scrimmage, Kennedy said, while the defense held the upper hand other times, but every scholarship player that’s eligible this season played, including freshman guard Breein Tyree, who was recently cleared for full participation after having reconstructive knee surgery in the spring.

The plan is to play everybody again in Thursday’s exhibition against Morehead College at the Pavilion. Tipoff is set for 6 p.m.

“I want to get all 11 of those guys some minutes and let them put on a uniform, perform in front of fans, let them shoot the ball in the Pavilion and start to simulate some game stuff because the following Friday, it is for real,” Kennedy said. “That is when we are going to start tightening on our rotation.”