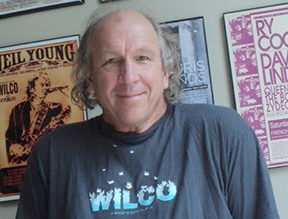 Former Ole Miss football standout George Plasketes returns to Oxford with a new book he has written and will appear on The Thacker Mountain Radio Hour Thursday at 6 p.m. at Off Square Books.

George Plasketes wore many hats — and helmets — during his time as an Ole Miss Rebel defensive end (1975-77). He was president of the M-Club, co-captain of the football team, president of the Fellowship of Christian Athletes, Academic All-SEC, Ole Miss Hall of Famer, as well as a leader of the only team that defeated Notre Dame in 1977 when the Irish won the national championship. Plasketes was voted Colonel Rebel at the end of that year.

Plasketes returns to Oxford on Thursday for the first time in 30 years. He will appear on The Thacker Mountain Radio Hour at 6 pm at Off Square Books). He will wear his latest hat, that of author, when he discusses his new book, Warren Zevon: Desperado of Los Angeles (Roman & Littlefield). A reception for Plasketes will be held following the radio show at 7 p.m. at the Shelter on Van Buren, across the street from Off Square Books, located in the basement of Neilson’s.

Both events are free and open to the public.

Since his Rebel career, Plasketes has spent the intervening years as a professor of media studies and popular culture at Auburn University.

“We read articles and books, watch films, listen to music and then talk about it. It’s a dream job,” he told the Eagle in an interview.

In addition to his gridiron heroics, Plasketes is also remembered in Oxford for his quick wit and quirky sense of humor as the public-address announcer at Ole Miss baseball games at old Swayze Field (now the Pavilion basketball arena.) At least until Miss. State came to town.

“Can’t recall if it was Coach Ron Polk,” Plasketes says, “who requested that I not be in the booth when they played here.  They had such a star-studded program — Will Clark, Rafael Palmeiro, Buck Showalter. I enjoyed playing [Dan] Aykroyd’s mumbling bridge from ‘Rubber Biscuit’ when a coach would visit the mound to talk to the pitcher.”

Other favorites included playing a recording of Steve Martin from Saturday Night Live shrieking, “Get off my back you big sex ma-sheen!!” when there was an argument with the umps.

“I can’t believe some of the ‘freedom’ I had,” Plasketes muses now.  “Not sure why. A bit puzzling, mildly unsettling on some levels in retrospect.”

Perhaps when you’re captain of a team that beats Notre Dame, 20-13, you earn a little leeway. Plasketes points out an interesting footnote to that bit of football history.

“The thing people forget to mention is, Notre Dame had a kid on their sideline named Joe Montana who didn’t start until the following week. I think Rusty Lisch was their quarterback. Montana started the next week and they went on to win the national championship.”

What else does he recall about that historic, sweltering day, Sept. 17, 1977, in Jackson’s Memorial Stadium?

“The gold helmets of theirs linger. Those Midwestern beef-eating boys were a lot bigger. It was humid. They were dying.”

Plasketes, who grew up Catholic in a suburb of Chicago, recalls a youth surrounded by loud fans of Notre Dame football.

“Simply because of the Catholic population you had to pull for Notre Dame. Maybe it was an early strain of non-conformity but I just never got on board with that.”

Plasketes says he is braced for the changes in Oxford even as he fondly recalls the town of the late 1970s and early 1980s.

“What a special time and what a special place,” he reflects. “It was such a great part of my life. The Hoka, The Ice House, Mr. Brown. Iconic places and people. It does become part of your soul and your spirit.”

Oxford Alderman-at-Large John Morgan knew Plasketes then and recalls those days at the Ice House.

“I think he really liked working at the Ice House because it was a real taste of the South.  It meant a lot to him that he got a chance to know many characters that hung out there.  Everybody from James Barr to Doyle Jones (who worked for my father), and of course Ronzo’s daily run to go buy ice for the Hoka.”

Plasketes also worked at the Hoka, the legendary former deli/cinema just off the square, strapping on an apron to help run the kitchen. Former Hoka owner Ron “Ronzo” Shapiro remembers, “Plasko” as something of a ‘gentle giant.’

“Plasko was like a character out of a comic book,” Shapiro says. “He was larger than life, like a Greek god with long hair but also a quick wit. He wore Hawaiian shirts and was always the merry prankster. He had so much fun, you might have thought he was on drugs but he never touched them and didn’t even drink booze.”

For his book on “Werewolves of London” songwriter Warren Zevon, Plasketes noted he’s been a long-time fan but still spent two years listening to Zevon exclusively as research.

“The book is pretty exhaustive. Comprehensive. I wrote it in a year and a half. So much of it I was really familiar with it. Even stuff I was familiar with, I was still hearing things in a much different way.”

Plasketes has always heard things in a much different way, which is why he says he can’t believe Zevon still hasn’t been voted into the Rock and Roll Hall of Fame.

“Every year when the [Rock and Roll Hall of Fame] list comes up, I just shake my head… ‘Bill Withers?’”