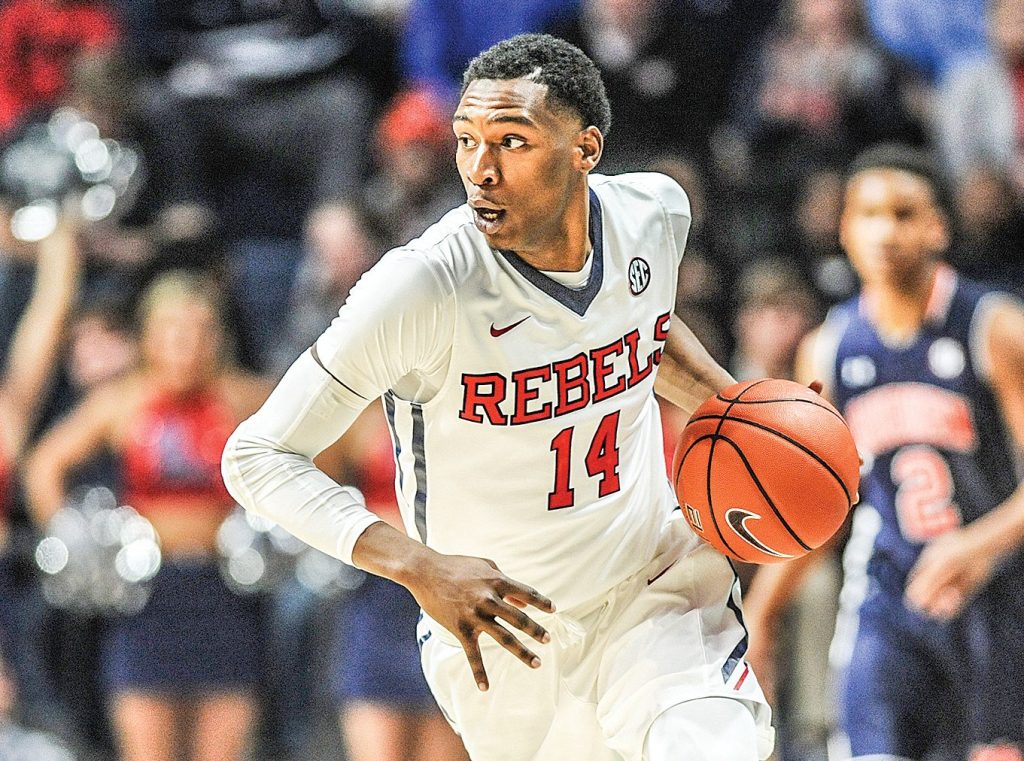 Senior guard Rasheed Brooks (14) is one of five players back from last season. (Bruce Newman)

With seven newcomers joining five holdovers, competition has been a common theme for the Ole Miss men’s basketball team during the preseason.

The Rebels have one final tuneup before things start for real Nov. 11 against Tennessee-Martin, and head coach Andy Kennedy plans to let the competition continue as he tries to pare down his regular playing rotation.

Kennedy said every scholarship player eligible this season will play in Thursday’s 6 p.m. exhibition against Morehead College at the Pavilion. Ole Miss has 12 players on scholarship, but 7-footer Dominik Olejniczak will sit out this season per NCAA transfer rules after coming over from Drake.

Senior forward Sebastian Saiz is entrenched as a starter, but Kennedy said the other four spots are “wiggling around” from one day to the next. New Mexico graduate transfer Cullen Neal, Miami transfer Deandre Burnett and senior Rasheed Brooks will likely make up the starting backcourt while Saiz said junior college signee Justas Furmanavicius and junior Marcanvis Hymon continue to duke it out for a starting spot beside him at small forward.

Guards Donte Fitzpatrick-Dorsey and Terence Davis are back after getting their feet wet as freshmen. Fitzpatrick-Dorsey played in 21 games with one start at the point a season ago while Kennedy calls the 6-foot-4 Davis, a two-sport star in high school, the most improved player on the team after focusing solely on basketball in the offseason.

Freshman Breein Tyree is another athletic option in the backcourt, though it will take some time for the 6-2, 192-pounder to get some of that athleticism back after being recently cleared for full contact coming off reconstructive knee surgery in the spring.

“This is sacrilegious for me to say this, but the initial name that jumps off the board is that you have a Russell Westbrook-type savage intensity to him,” Kennedy said of Tyree. “He jumps off the page the way he attacks. I don’t know if that is who he is going to be in a few months, but that is who he is. I have never had a guard like him here.”

The biggest difference from last year to this year is the help Saiz has gotten down low. The 6-9, 240-pound Saiz was easily the biggest player on the roster a season ago, but the Rebels’ latest recruiting class brought in a pair of freshmen bigs in 6-9 Nate Morris and 6-11 Karlis Silins, who should help Ole Miss’ rebounding and defense at the rim.

“I think the quality of our depth is much better,” Kennedy said. “I think we are much more physical. We have bigger bodies this year.”

The exhibition will be Kennedy’s first chance to see the old and the new mesh in a true game setting. The Rebels won a controlled scrimmage against Arkansas-Little Rock on Sunday, but it was closed to fans and the media.

“Kids react differently when there are people in the stands,” Kennedy said. “That is the next stage. I need to see, especially from our new guys, react from that and take coaching in situations like that.”

Players are ready to see what it looks like, too.

“I feel like we’ve been practicing since forever,” Saiz said. “We’ve been together the whole summer. I think we’re all in, and we’re ready for it.”