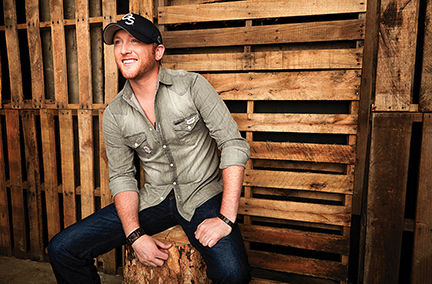 The hat is actually in tribute to his alma mater, Georgia Southern, and bears the initials “G.S.” So it’s probably no coincidence Swindell is bringing his rocking “Down Home Tour,” sponsored by CMT, to Oxford this weekend when his beloved Eagles face Ole Miss Saturday in Vaught-Hemingway Stadium.

Before the 11 a.m. kickoff, however, Swindell will entertain a sold out show Friday night at The Lyric. Before he takes the stage, Jon Langston will open the show at 9 p.m.

Swindell took the country music world by storm in 2013 with his mega-hit “Chillin It” off his self-titled debut album and followed it up with two more hits “Hope You Get Lonely Tonight” and “Ain’t Worth the Whiskey,” which reached number one last year. The fourth song off the album, “Let Me See Ya Girl,” peaked at No. 2 on the country charts a year ago. That led to an ACM award for New Artist of the Year in 2015.

He’s currently touring and promoting his follow up album “You Should Be Here,” and the title track reached No. 1 in April. The second single off the album “Middle of a Memory,” was released in May.

For a country guy from Bronwood, Georgia, who just a few short years ago was selling tour merchandise for his GSU Sigma Chi fraternity brother Luke Bryan and writing songs on the road, it has been a skyrocketing ride and he wants the crowd at his live show to come along.

“Honestly,” he said in a recent interview, “I just want it to be fun. I get people who see me on stage who say, ‘Hey, it looks like you’re having the time of your life up there,’ and I really am. Every night is just a blast and they join in.”

And Swindell is all energy before and once he hits the stage.

“My band laughs at me because I’m a pacer,” he said. “I get anxious every time I go on stage. My music means the world to me, so if I wasn’t jumping around backstage getting amped up for the show, something would be wrong. Then, when I hit the stage, I just want to get those first lyrics out. It’s like football in high school. On the kickoff, once you get that first hit in, you’re in your groove. From then on, it’s wide open. I’m having fun.”

“I don’t want to have a song where people feel comfortable going to get a beer,” he said. “Once we get started, I don’t want them to risk missing what’s next. I want them to leave saying, ‘That’s the best show I’ve ever seen.’”