Lafayette starts Class 4A playoffs with ‘challenge’ in Shannon 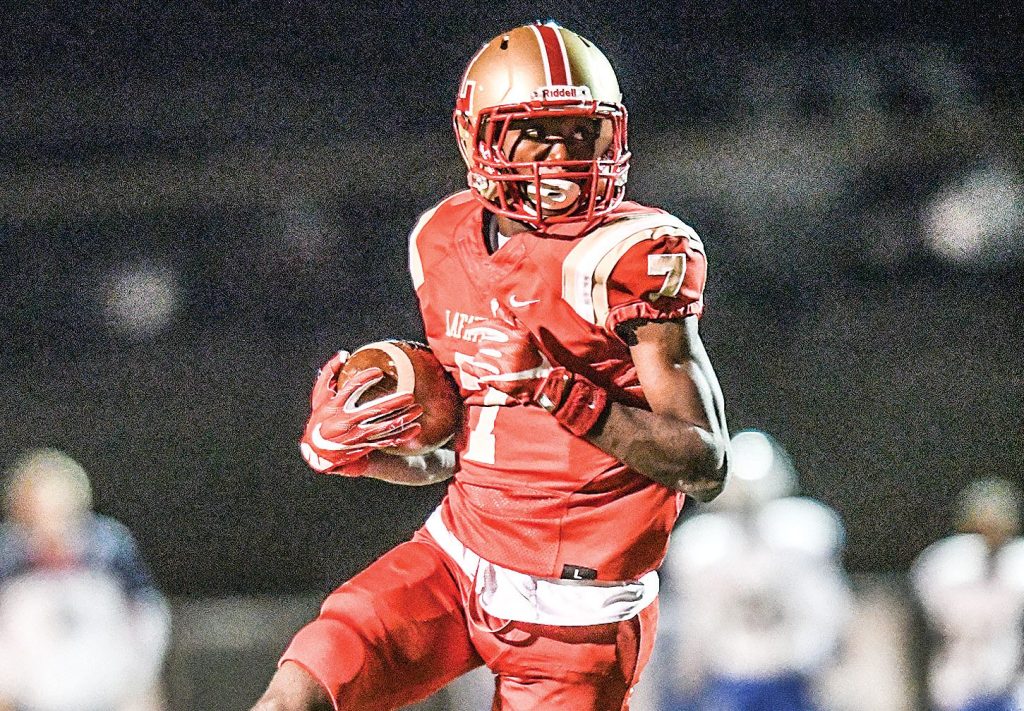 Brandon Turnage (7) and the rest of the Commodores take an eight-game winning streak into Friday’s MHSAA Class 4A first-round playoff game against Shannon at William L. Buford Stadium. (Bruce Newman)

The dust from the regular season has settled and Lafayette finds itself in prime position heading into the postseason.

The Commodores ran the table in Region 2-4A for a perfect 5-0 record and rattled off eight straight victories to close out the season. Their reward is the No. 1 playoff seed in Region 2-4A and a home game against the Shannon Red Raiders in the first round of the MHSAA Class 4A playoffs at William L. Buford Stadium on Friday (7 p.m., 105.1 FM).

Head coach Michael Fair led Lafayette (8-2) into the postseason in his first year at the helm after taking Senatobia to the playoffs his two seasons with the Warriors.

“Preparation has been really well this week,” Fair said. “I’m proud of our guys and how they’ve practiced so far this week. Shannon is a good first-round opponent. … I like where the team is now. We’re ready for the challenge.”

The Commodores ended what Fair called their “second season” with a mixed bag of momentum last week at Byhalia. Lafayette came away with a 34-6 victory to remain undefeated and keep their winning streak intact as they enter the playoffs. The first-half performance, which saw two turnovers, including one inside the Indians’ 5-yard line, was not what Fair wanted to see out of his team before the “third season” began.

“I talked to our guys in our meeting Monday and I kind of got a few things off my chest,” Fair said. “I said, ‘OK, guys. We’re moving on. Never going to mention it again. The playoffs are here and let’s get better.’ They responded well.”

During the season, Lafayette has had to prepare for an offense that either excels at running the ball or throwing the ball. This week, Fair and his defensive staff will have their hands full preparing for a Shannon team that is as balanced a team as the Commdores will play.

The Red Raiders (6-4), who enter as the No. 4 seed out of 1-4A, have an offense that averages 445.4 yards a game. Sophomore quarterback Jordan Gilleylen has thrown for nearly 1,500 yards, completing 101 of 171 passes for 12 touchdowns with nine interceptions. Gilleylen has plenty of weapons with five receivers who have totaled more than 200 yards this year. Sophomore Jerry Marion leads the group with 41 catches for 487 yards and four touchdowns.

On the ground, the Red Raiders are led by a dual attack from a senior duo of Keegan Huddleston and Vincent McIntosh. Huddleston sets the pace with 172 carries for 1,021 yards and eight touchdowns. McIntosh leads in scoring with 11 touchdowns on 82 carries for 631 yards.

“(Shannon) has a lot of talent,” Fair said. “Not a normal 4 seed for sure. … They’ve got a lot of talent and a lot of receivers on the outside that can go get it. They run the screen, and it’s going to be a big challenge for our defense.”

The way the playoffs are set up in Mississippi, home games are not a guarantee for any team, no matter how successful they were in the regular season. It depends on each round’s outcomes and who advances. Fair knows the importance of getting to start the postseason at his own field and setting the tone for the next month.

“A couple years ago, I remember we came out 4 (seed) my first year at Senatobia,” Fair said. “We had to go to Macon to play. Once you do that a couple times, you realize how important those district games are.”