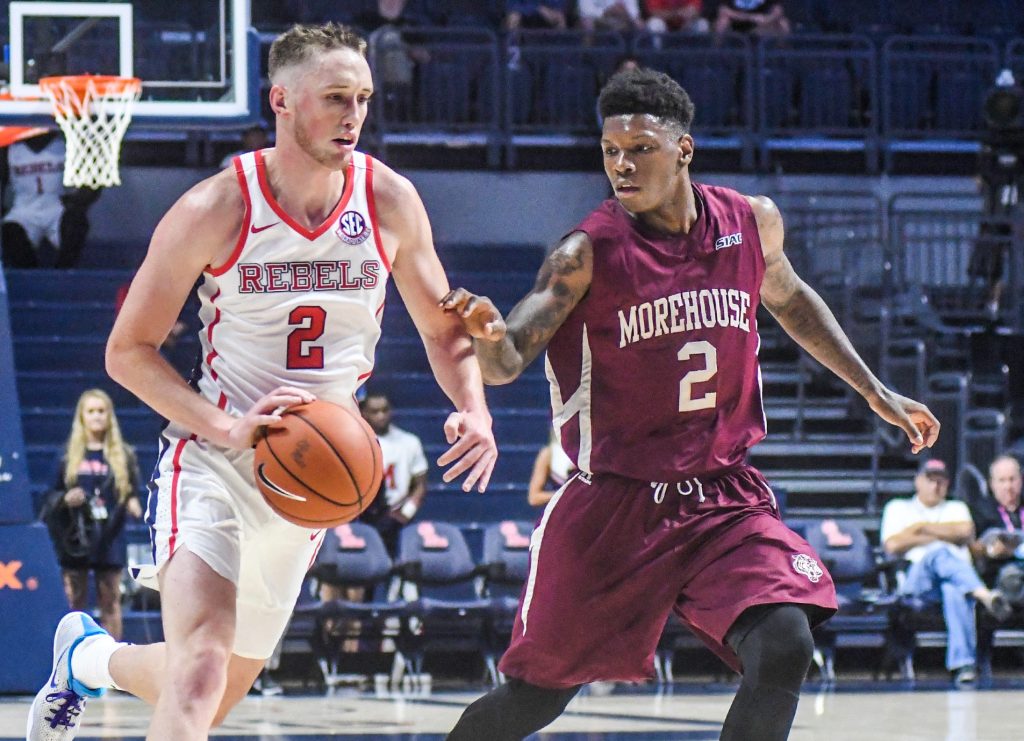 Andy Kennedy said earlier in the week he’d get a look at all of his scholarship players in the final tuneup before things begin for real for his new-look team.

Ole Miss’ men’s basketball coach got a look at most of them, including four of his five newcomers.

Ten players got minutes for the Rebels in a 90-66 exhibition win over Morehouse College on Thursday at the Pavilion. Freshman Nate Morris, whom Kennedy said was held out because of an injury, was the only eligible scholarship player who didn’t see the floor.

“Tonight, to put the uniform on and play in front of whoever was here, I think it was good,” Kennedy said. “Different guys play different when you put people in the stands.”

In their first game in a Rebel uniform, graduate transfer Cullen Neal (team-high 19 points) and Deandre Burnett (17), who sat out last season after transferring from Miami, combined for 36 points, nine assists and five turnovers. Rasheed Brooks had 17 points and five rebounds while forward Sebastian Saiz finished with 11 points and nine rebounds despite not playing much in the first half because of foul trouble.

Terence Davis added 14 points for the Rebels, who had eight players score. Neal, junior college transfer Justas Furmanavicius and 6-foot-11 freshman Karlis Silins helped on the glass with five boards apiece as Ole Miss outrebounded the much smaller Maroon Tigers 45-29 and made 24 of its 34 free throws.

“It was fun to suit up as an Ole Miss Rebel,” said Neal, who averaged 12.3 points and 3.7 assists as New Mexico’s starting point guard last season. “We were able to get out there and play with each other for the first time since we have such a new team, so it was a great experience.”

Ole Miss started Neal, Burnett, Brooks, Saiz and Furmanavicius and frequently shuffled players in and out with nine players logging at least 16 minutes. The Rebels led 38-32 at the half, and it wasn’t until a majority of the first group was back on the floor together early in the second that Ole Miss pulled away.

“With the naked eye, I don’t like our awareness,” Kennedy said. “I thought we were too passive defensively in man. We were trying to mix and match. There were times that we didn’t have all five guys in the right defense.”

“We have a bunch of new guys. It’s an exhibition, but that’s their first-ever Division I college game,” Neal said. “It could’ve been some nerves in there or it could’ve been excitement, so I think that could’ve led to some turnovers as well.”

The Rebels led by just four less than two minutes into the second half but used a 29-3 run to take their largest lead at 69-39 with 11:36 left. Ole Miss shot 50 percent from the field and got closer looks as the game wore on.

Ole Miss went 5 of 8 from 3-point range in the second half after making just 7 of 21 from deep in the first 20 minutes, though Kennedy said he didn’t have a problem with most of the shot selection against the Tigers’ zone.

“Settling too much for sure, but a lot of (the 3s) are clean looks by SEC players,” Kennedy said. “You’ve got to make them.”

Ole Miss will officially open the season Nov. 11 at home against Tennessee-Martin. Tipoff is set for 6 p.m.