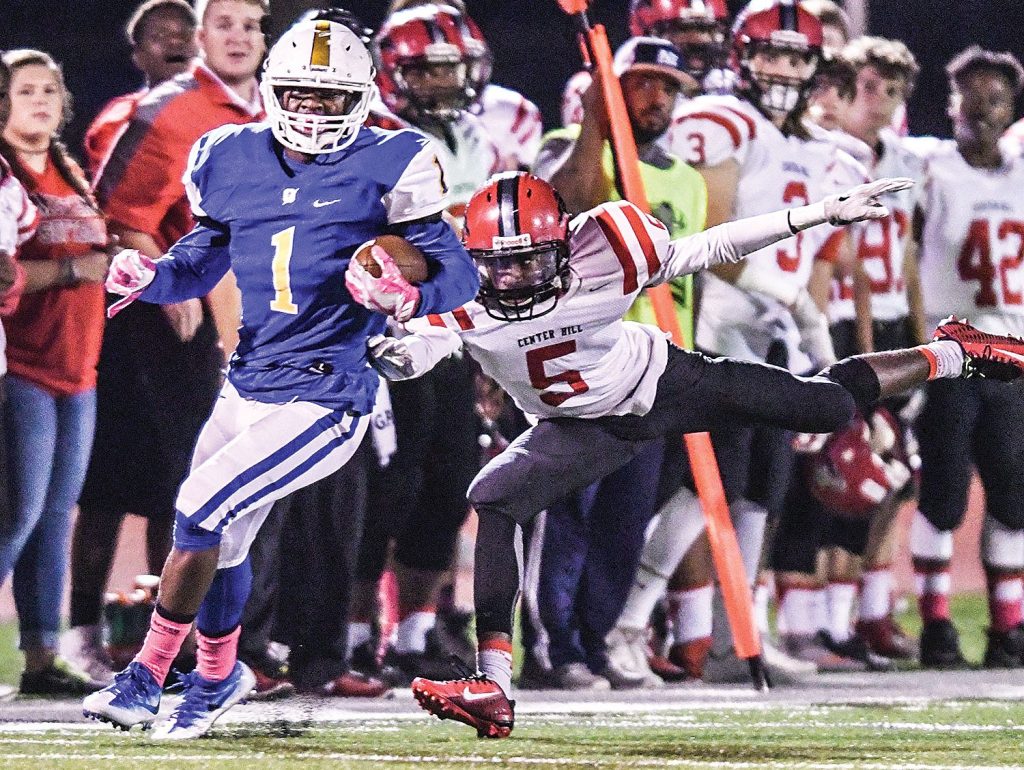 Junior running back Hiram Wadlington (1) and the rest of the Chargers will take a five-game winning streak into Friday’s regular-season finale at Lake Cormorant. Oxford needs another win to clinch a home playoff game next week. (Bruce Newman)

With one game to go, Oxford still controls their own postseason destiny in regards to the start of next week’s MHSAA Class 5A playoffs.

All they have to do is win their sixth straight game against a Lake Cormorant opponent that is fighting for the same postseason scenario.

The Chargers and the Gators are both 5-1 and in second place in the Region 1-5A standings. West Point is 6-0 and has already wrapped up the region championship, but the No. 2 seed is still up for grabs with the victor at Lake Cormorant coming away with home-field advantage in the first round.

“We’ve talked about hosting a first-round playoff game, and we’ve got ourselves in a situation where we don’t have to scoreboard watch,” Oxford coach Chris Cutcliffe said. “We know that the winner of this game on Friday night is going to be playing at home next week. So we know exactly what’s on the table and Lake Cormorant does as well. It’s going to be an intense game with high stakes on the line.”

Earning the No. 2 seed also has the benefit of putting that team on the other side of the bracket from West Point, allowing them to potentially avoid the Green Wave until the North Half championship.

After dropping their opening 1-5A game at West Point, Oxford (7-3) rattled off five straight wins in the region to put themselves in a spot to finish runner-up. Lake Cormorant (7-4) started off region play with a three-game winning streak before falling to West Point as well. The Gators have won two straight since. The Chargers defeated them 56-26 last year at Bobby Holcomb Field.

Defense may not have much of a say in the outcome of the game on Friday night, or they may have the biggest impact. It all comes down to who can slow down the other team’s potent offense. Lake Cormorant is averaging 32.5 points per game and 370.2 yards of offense. Sophomore quarterback Ben Rohrbcaher leads the Gator offense with 2,219 yards and 22 touchdowns.

“They’re very, very talented on offense,” Cutcliffe said. “(Rohrbacher) is playing well, and they have a good running game. So they are a balanced offense and they can make you defend a lot of different areas. … You always think about different ways a game can go, and Lake Cormorant has been able to score a lot of points. You have to go into it with a mindset of producing on offense to set our defense up.”