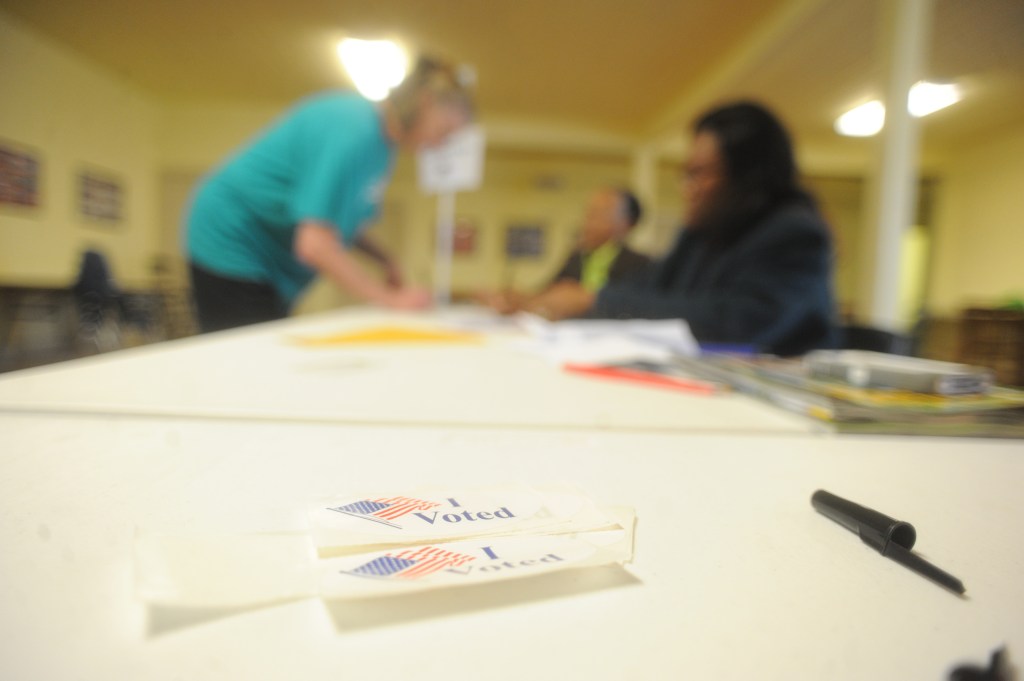 Who won the Presidential election?

By Jennifer Froning and Connor Heitzmann
Special to the EAGLE

Campaign volunteers from all generations are making their contributions to the Democrat and Republican parties by registering voters, making phone calls and working behind the scenes.

Volunteers from both major parties set out to inform the public about their candidates in the hopes of getting them to vote, particularly for their candidate.

And there are several volunteers right here in Oxford and Lafayette County.

“I volunteered to help register to vote because I believe that it is a fundamental right, it’s not something you can expect to happen, you have to get out and make it happen,” said Will Fryerson, an ambassador for the Vote Everywhere Program at the University of Mississippi.

Fryerson and another ambassador for Vote Everywhere set a goal to get 1,000 new voters registered.

They pushed for student voters by helping out different sororities and organizations on campus that registered voters at the Student Union.

Larkin, a senior political science major, first became interested in politics when he saw George W. Bush while on a trip with his father in D.C.

“My parents would always take me to different political rallies at a young age,” Larkin said. “At that time, Bush drove out of his motorcade, while I was in a big crowd of people.”

“When he began to wave to the crowd, it felt like he was waving directly at me,” Larkin said.

Ever since then, Larkin has had the drive to be a part of the process, getting involved with campaigns as early as his junior year of high school where he was on the campaign trail with Mitt Romney and staff.

“There’s a lot of work that goes on behind the scenes,” Larkin said. “They put me in a phone back where we called the more ‘left-wing’ people, to try and get them to vote for the Republicans.”

Along with answering phones, Larkin was tasked with making home visits during the Romney campaign, recalling the few times when it was difficult.

“Unfortunately, if you happen to go to people’s homes and knock on doors they want your candidate to be exactly like them,” Larkin said. “It really makes it tough to connect with the general public in that way, when one thing on their checklist doesn’t line up with your candidate.”

After working for the Romney campaign as a junior, during his senior year of high school Larkin was able to find more interesting jobs to be a part of while volunteering.

“I got an internship that was just a whole lot of data collecting and filing data into different spreadsheets,” Larkin said. “Being able to look up voters and see when they voted in the past was really neat.”

Larkin said he is thankful for having been given the opportunity to experience all he has, up till this point, believing that being introduced to politics at a young age has made him more aware of the world today.

Yoste, the son of Lafayette County Executive Republican Committee member Geoffrey Yoste, has had his fair share of volunteer experience as well. Yoste started volunteering at 10.

Getting thrown into the world of politics at such a young age, Yoste was able to gain insights on political figures and how the adult world, of politics, operated.

“Mainly I was in charge of passing out stickers, flyers and holding up signs on election day, as well as throughout the entire campaign,” Yoste said. “Being in the atmosphere growing up I learned to let it grow on me and begin to love it.”

Most recently, Yoste attended the Republic National Convention where there, he too, was a volunteer, helping with the everyday process of checking the attendees in and handing out the daily itinerary.

Along with the chance to hear key figures in the Republican Party speak such as Donald Trump and, challenger, Ben Carson, Yoste said volunteering can have its benefits.

“There’s going to be people who disagree with you on every inch of the spectrum, but that’s okay,” Larkin said. “Through those interactions, it will be nice to know that all my work could lead to more opportunities, in the future.”

“I volunteer because I want to make America great again,” Yoste said. “I want to do everything I can to make, not only the city of Oxford better, but our great nation as a whole.”

With campaigns taking new volunteers all the time, it becomes easier and easier to get involved and be a part the process.

Evelyn Smith was in charge of recruiting volunteers from Lafayette County to be a part of the political process by registering people to vote. Smith said she does not represent a party when she registers people to vote; she is representing democracy.

“We think it’s very important that people vote because it is part of our democracy, which is why we needed to find volunteers to register people to vote,” Smith said.

The voter registration drive table was set up outside of Larson’s Cash Saver and registered voters from September 26 thru October 7. The volunteers worked in two-hour shifts from 8 a.m. till 4 p.m.

Smith and her partner, Ann Philippi, created a sign-up sheet and invited people to volunteer; consequently, volunteers began texting, calling and emailing them.

The voter registration drive was non-partisan so volunteers came from the both major party organizations in Lafayette County and anybody who wanted to register voters.

Seventy-one volunteers registered over 300 voters during the two-week registration drive, from millennials to seniors.

They also made sure people who had changed their names or addresses could re-register, according to Smith.

Additionally, volunteers were asked to arrive 15 minutes early so that the previous shift of volunteers could share any pertinent information with the incoming helpers.

Every day, Smith went to the drive to pick up the applications and drop them off at the city clerk’s office. If approved, a voter got their voter registration within two weeks of registering. Some voters received their registrations as fast as one week after registering.

The Lafayette County Democrats asked for volunteers to help register voters and many of the members signed up to work multiple shifts. Connie Parham volunteered to work four hours of the voter registration drive and was willing to work as much as she was needed.

“It’s the first time I’ve worked for a party … this is non-partisan, but it’s to help Hillary get elected because if we could get enough people to vote its possible she could carry Mississippi,” Parham said.

Parham is a longtime resident of Oxford and has lived here for over 40 years. She worked at the Ole Miss Law School for almost 35 years before she retired.

Even though Parham identifies as an Independent, this year she is working on behalf of the Democratic party.

“I think this election is so important. I’m so terrified that Donald Trump is going to get elected that several friends and I decided we needed to do what we could, to work,” Parham said. “I think it’s really important to get people to vote, especially this year.”