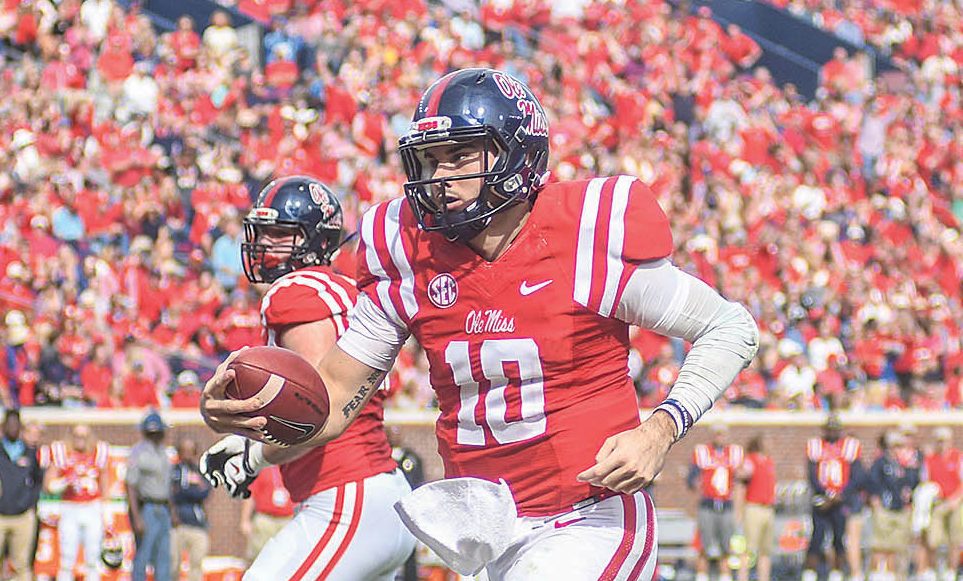 Ole Miss quarterback Chad Kelly (10) scores a touchdown against Georgia Southern at Vaught-Hemingway Stadium in Oxford, Miss. on Saturday, November 5, 2016. Kelly left with a knee injury in the third quarter of the Rebels' 37-27 win. (Bruce Newman)

Ole Miss got its first win in more than a month Saturday.

But it may have come at a price.

Chad Kelly left the game in the third quarter with an injury to his right knee. He was escorted to the locker room by trainers and eventually returned to the sideline but never re-entered the game.

The Rebels beat Georgia Southern 37-27 in front of 60,263 fans at Vaught-Hemingway Stadium to snap their three-game losing streak, but all the talk afterward was about the health of Ole Miss’ senior quarterback.

“I have no idea,” Ole Miss coach Hugh Freeze said of the severity of the injury. “They’ll have to do an MRI and check it. Everything right now would just be speculation.”

Kelly finished 16 of 23 for 223 yards with two passing touchdowns and led three consecutive scoring drives at the end of the first half to help the Rebels (4-5) erase a two-score deficit. He also ran for a pair of scores.

Freeze said he liked the way redshirt freshman Jason Pellerin managed the game in Kelly’s absence despite the Rebels managing just two field goals in the second half. He added he couldn’t envision himself pulling the redshirt off prized freshman Shea Patterson with three games left should Kelly’s injury turn out to be that serious, but he might see if former quarterback Ryan Buchanan, who gave up football after last season, wants to dress out should the situation become dire.

Akeem Judd ran for a career-high 139 yards and a score while Pellerin ran four times for 29 yards and was 1 of 5 passing with an interception. But with Kelly watching late, it put the onus on the Rebels’ much-maligned defense to protect a lead Ole Miss worked hard to get.

Georgia Southern (4-5) ran for 220 yards in the first half highlighted by Matt Breita’s 68-yard scamper to push the Eagles’ lead to 21-10 with 10:13 left in the second quarter. Kelly’s second touchdown run cut into the deficit, Judd’s 9-yard scoring run on the ensuing possession put Ole Miss in front, and the Rebels ended the first half with 21 unanswered points when Kelly’s 38-yard touchdown pass to Evan Engram gave them a 31-21 lead at the break.

Ole Miss, which began the day 118th nationally against the run, simplified its approach against Georgia Southern’s run-heavy offense to limit the Eagles to 47 rushing yards in the second half and three first downs in the final quarter, yet things weren’t comfortable for the Rebels until Breeland Speaks batted away Kevin Ellison’s fourth-down pass near midfield with less than four minutes left.

“Honestly it was just our base defense,” safety Zedrick Woods said. “Just go out and execute. We probably made like four calls (in the second half), so we just had to execute the defense.”

Said Freeze, “We’ll take it. Our goal was to be 1-0 this week. We accomplished that.”

Now the Rebels await word on their most valuable player.

“(Kelly) said he’s fine,” Pellerin said. “I don’t know if he is or not, but he’s the one who knows how he feels. Chad’s one of the toughest guys I know.”