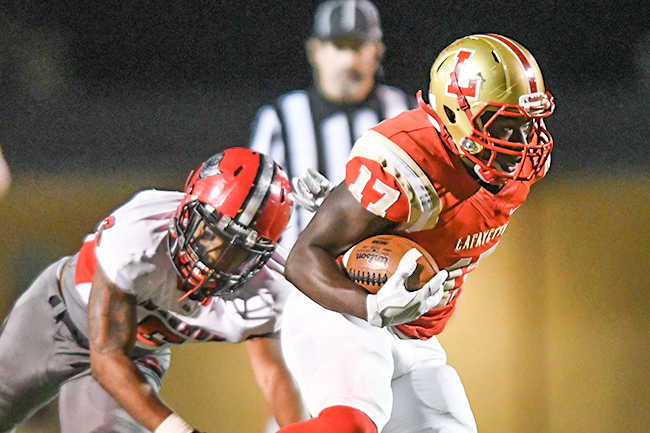 Lafayette High's Jamarcus Quarles (17) runs past Shannon's Cameron Buck (6) to score in the first quarter in the MHSAA Class 4A playoffs at William L. Buford Stadium in Oxford, Miss. on Friday, November 4, 2016.

The first round of the playoffs couldn’t have gone much smoother for the Lafayette Commodores, as they took control of the game early and didn’t let up, winning by a score of 44-0 against the Shannon Red Raiders in a first round matchup of the MHSAA Class 4A playoffs on Friday at William L. Buford Stadium.

“I thought we played really well. It was a clean football game, a lot of effort, a lot of intensity, it was everything you want out of a playoff atmosphere for your football game,” Lafayette head coach Michael Fair said.

Lafayette (9-2) controlled the game with their ground attack, with Jamarcus Quarles rushing for 158 yards and two touchdowns and Jamie Shaw running for 41 yards on seven carries.

“That’s who we want to be and from day one we want to win the line of scrimmage and our guys, our lineman I thought did a tremendous job up front,” Fair said. “They actually changed their front halfway through the first half, gave us some looks we hadn’t practiced a whole lot on because they hadn’t done it but we took it in stride and continued to really do well out there.”

The Commodore defense dominated the game, only allowing Shannon into the red zone once in the third quarter, where a goal line stand forced a turnover on the one yard line. Fair was impressed with how they controlled the line of scrimmage.

“Defense flew around tonight and I’ll tell you our defense can be special when then turn up the intensity like they did tonight,” Fair said.

The long field seemed like a daunting task for the Commodore offense, but they managed to travel all 99-yards and score on just one run from Quarles.

“The thing that sets Jamarcus apart from other ones is a lot of folks can break a long run, cause usually you get them all down there in the box in goal line situations, but the difference in him is he finishes runs,” Fair said. “99 yards, backside corner had an angle on him, and he outran the angle. So he’s a special back and we know that and he’s capable of scoring on any play.”

Freshman Randy Anderson also made his mark on the game, as in the third quarter he came in to run from the quarterback position. It looked like he was wrapped up by the defense for a loss but then he suddenly split through the group of tacklers, and one move later he was racing to the endzone.

“We’ve been seeing it in practice every day. Randy can go, he’s a special talent and he I’m glad he had the opportunity to break a couple of runs tonight, it was fun to watch him run,” Fair said. “He’s a good young man, works real hard, we moved him up this year off the freshman team onto the varsity team and he’s been doing that in practice so I’m glad he got the opportunity tonight to show what he can do.”

Next week, Lafayette will host Louisville in the second round of the playoffs. The Commodores have already gotten a taste of Louisville, defeating them 42-7 earlier this season at home.

“We’re playing against ourselves right now, we think we have a chance to have a really good football team, a special team, its all about what we do,” Fair said. “We’re definitely going to be concerned with our opponent and our coaches work real hard to get a gameplan up, and if we keep improving like we have the last couple of weeks we’re going to be ok.”