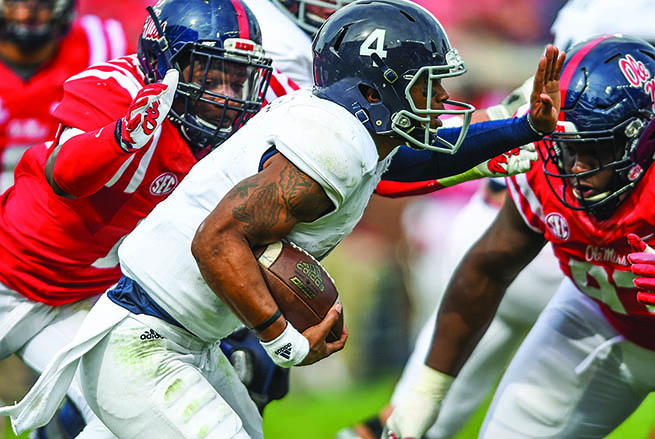 The triple option offense gives any defense trouble. With a run defense such as Ole Miss’ it compounds the issue even more. Which is what Georgia Southern was able to do for a half in Saturday’s win. It was the second time in eight games Ole Miss had to prepare for an unorthodox offense such as the triple option, having played against Wofford’s version of it in the second week of the season.

In a game where Ole Miss felt they could take a breather from the heavy schedule of a Southeastern Conference team, on top of the three straight losses that have doomed their season, it was anything but a relaxing afternoon. Senior Matt Breida and the rest of the Georgia Southern running backs dominated in the first half of the game, dictating the pace against a Rebel defense that seemed unable to stop them, leading to a 21-10 Eagles’ lead early in the second quarter.

“We over-prepared for the option,” Ole Miss head coach Hugh Freeze said. “At halftime we just said lets play our base stuff and stop the inside zone. …We just started playing more physical in the second half and we were not going to just defend the option.”

Georgia Southern ran for 220 yards in the first half on 33 attempts, averaging 6.7 yards a carry. Breida did the bulk of the work, rushing for 100 yards on 22 carries for one touchdown. The touchdown was a 68 yard run when the Ole Miss defense was not set, leaving Breida to run essentially untouched for the score, putting Georgia Southern up 21-10 at the time. Wesley Fields ran for 73 yards on 10 carries while quarterback Kevin Ellison had 16 attempts for 54 yards and a touchdown at the end of the first quarter.

“They really had us off-balance early,” defensive coordinator Dave Wommack said. “They did some things that weren’t on the film and they did a really nice job of coaching. …On the big run, that was totally my fault. I didn’t give our guys a chance to get lined up and got it called late. That was totally on me.”

Adjustments at halftime seemed to do the trick for Ole Miss as they stifled Georgia Southern’s run attack, holding them to 47 yards the final two quarters. With the Eagle’s key weapon bottled up, it caused Ellison to have to rely on his arm more, completing 7 of 16 passes for 134 yards, one touchdown and one interception.

“We just made a couple changes,” defensive end Fadol Brown said. “Alignments and just fitting it up. Getting the job done and executing.”