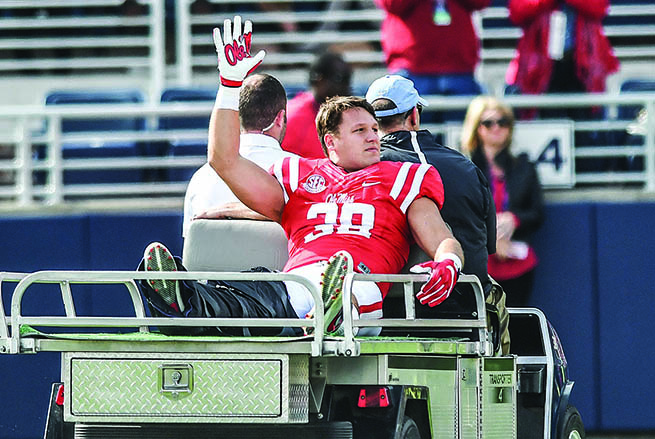 Ole Miss was already lacking at linebacker, and an experiment at the position on Saturday caused the defensive front to become even thinner.

Defensive end John Youngblood tried his hand at linebacker after practicing there all week. Early in the game, Youngblood dislocated his right ankle, which was immediately tended to by the training staff and had an aircast put on and a cart on the field minutes after the injury occurred.

It is unknown the extent of the injury, but with only three regular-season games left, it may be hard to imagine if the senior will return to the playing field this year. Youngblood had a total of 22 tackles through eight games with six of those unassisted. He also had 1.5 tackles for a loss while playing at defensive end, filling in for the injured Fadol Brown most of the year.

“It’s been that kind of year for us,” Ole Miss head coach Hugh Freeze said. “Youngblood’s been through so much, obviously with the loss of his father. He’s a captain, a leader. It stinks to see kids go down with injuries like that to end their season.”

After getting his first start as a Rebel against Wofford in the second week of the season, Rommel Mageo was tabbed for his second career start on Saturday at Mike linebacker against Georgia Southern. Mageo earned the start after Freeze liked what he saw out of him last week against Auburn in a small sample size of six plays.

The graduate transfer out of Oregon State has struggled grasping the defensive playbook and scheme of defensive coordinator Dave Wommack, which has been heavily documented since the start of fall camp, but he seemed to understand it well against the Eagles. Mageo recorded 12 tackles with five of them unassisted and 1.5 for a loss.

Mageo is the latest in a rotation of players who have started or received multiple starts at the Mike position as Wommack and his defensive staff try to find anyone who can excel and make tackles in the second level of the defense.

“I think (Mageo) was up and down,” Wommack said. “I don’t think we fit some things as well as we needed to in the first half. (Georgia Southern) was hitting the zone on us inside, which makes it difficult on second down. I thought he got settled in and played the second much better.”

With injuries piled up all along the offensive front, a new face was snapping the ball to the quarterback on Saturday.

Sophomore Javon Patterson got his first career start at center at either the high school or collegiate levels with Robert Conyers and Sean Rawlings still ailing from knee and foot injuries. Before the game started, Conyers rotated with Patterson, Jacob Feeley and Jordan Sims, snapping footballs to the quarterbacks during pregame warmups.

“I felt pretty comfortable in there,” Patterson said. “I had two bad snaps. One in the first half and one in the second half. Other than that, I felt comfortable. … First game experience went pretty well.”

Fadol Brown had a career-high 14 tackles, which also led the team. … Tight end Evan Engram had four catches, helping him eclipse the single-season school record for catches by a tight end with 53. The original record was 52 by Barney Poole in 1947. … Freshman Benito Jones got his first career start at defensive tackle.