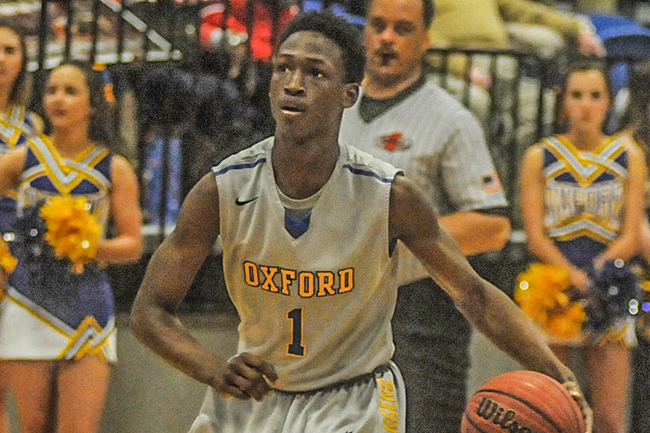 Oxford’s boys basketball team is going to have a different look to it this season. Without an inside presence such as D.K. Metcalf, who is gone and making plays at Ole Miss on Saturdays in the fall, the Chargers are having to adapt to a new playing style this season.

If the Chargers are going to have to live and die by perimeter shots, they at least have a key weapon in senior Jarkel Joiner. The reigning EAGLE Player of the Year returns with fellow senior Terry Williams along with their combined 37.6 points per game from a season ago.

What Oxford loses is Metcalf’s 6-foot-4, 215-pound frame as a post player. This year, Oxford has three players taller than 6-2. Junior Tucker Scott comes in at 6-4 and freshman J.J. Pegues measures at 6-3.

“We may have to play in the 6-foot-and-under league this year,” Tyler said. “We don’t have a lot of (height). There’s been years where we’ve had the most height in Mississippi. We’re lacking height, but I think we make it up with our intensity and our work ethic.”

The makeup of Tyler’s team this year has caused him to have to change his coaching style and philosophy. He is having to position his team to be a baseline-to-baseline type offense and rely on getting second- and third-chance shots by creating rebound chances without an inside presence constantly under the rim.

“Offensively, we’ve had to definitely change some things up,” Tyler said. “Because we know our strength isn’t really under the goal and in the paint where we can just bulldog some people and really push them around. We feel like it takes some heart and some smarts in rebounding and putting yourself in position. … We aren’t going to win many games on first shots if any.”

Along with the senior experience of Joiner and Williams, Tyler is also pleased with his crop of younger players joining the team this year. Oxford will dress out five freshmen, and a few may find themselves in the starting lineup sooner rather than later. Two of them started with the varsity lineup during summer games, and Tyler could potentially put three of them in the lineup during the season. Pegues and Tykel Owens are two that Tyler is very high on from the freshman class.

“I think it’s one of the best ninth-grade groups I’ve had since the 90s,” Tyler said. “It’s a real talented ninth-grade group. On the flip side of that, our sophomores and juniors are challenged as far as basketball talent and experience. We’ve got some really talented seniors, and there will be a learning curve with some of our younger players.”

With the issues of experience and talent that could prove difficult for Oxford at times, Tyler is still confident his team can return to Jackson again come February.

Next go round
Cliff Ormon has his first season as the Oxford girls basketball coach under his belt along with a full offseason. He is ready to see if his team is prepared to build off its trip to Jackson last season, where they were eliminated in the quarterfinal round at Jackson State University.

Much like the boys team, it will be a challenge after losing key players and productivity on the court. EAGLE All-Area team members Aliyah Herod and Kyla Malone as well as Emma Schultz are gone after graduating in May. With them goes nearly 50 percent of last season’s offensive production, leaving big shoes to fill on the court as well as in the scorebook.

“We want maximum effort every day,” Ormon said. “We have some returning players who we think are going to be very good, but it’s going to be getting used to playing with each other early. As the games go on, we’re going to figure out their roles.”

Returning are seniors Tiara King, Maggee Hobson and junior Jordan Freeze, who were big contributors a year ago. Freeze averaged 9.6 points a game while King’s status is now uncertain after suffering injuries in a car accident on Sunday night.

Of the 19 players on Ormon’s roster, 10 of them are underclassmen with five sophomores and freshmen.
“We are expecting some of our older players to step up,” Ormon said. “Tiara King, Jordan Freeze to carry a big load early and get these kids acclimated.”