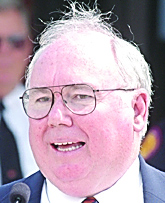 Jerry Johnson has been a constant in Lafayette County, spending more than 40 years helping to keep the residents of the county safe.

Now the county fire coordinator has decided it’s time to retire and begin the next chapter in his life.

The Lafayette County Board of Supervisors announced during their meeting Monday evening that Johnson’s retirement will become effective Dec. 31.

Wes Anderson, who has been the co-coordinator with Johnson for the last several months, will take over the position.

“The intent was for Wes to take over and Wes is up to speed so it’s time for me to go,” said Johnson.

Johnson, who has been part of the county fire department for more than 44 years, just recently became a grandfather for the third time and is ready to spend more time with his family.

“I started in the fire service in ’72,” Johnson said. “It’s going to free me up to travel and do some things. I said if I don’t start doing some things, I’ll never do it. But I’ve enjoyed it.  Lafayette County is one of the greatest volunteer systems I’ve ever seen. Not because I had a bunch to do with it. There’s a lot of people before me that helped make the system run and I just took what they had and along with good help from a lot of people and try to move it forward and do what was right. We’ve been very successful.”

But don’t think Johnson is getting out of the volunteer fire department altogether.

“I’m still going to remain around in the Lafayette County Fire Department and do whatever I can,” Johnson said.

Anderson approached the supervisors and informed them the county burn ban that has been in place was set to expire today and requested the board renew the ban.

Anderson said although the state currently has a burn ban in place, the county should also continue its ban on outdoor burning just in case the state lifts its ban.

“Panola County could get a bunch of rain and we not get anything,” Anderson said.

Since the burn ban has been in place for the last two months, Lafayette County has not had a significant amount of rain and there have been several violators of the burn ban and county and state fire units have responded to several fire calls for grass fires.

The burn ban will remain in place until Dec. 5 or could be lifted when the county receives significant rain.

As of Nov. 2, every county in Mississippi with the exception of Hancock, Harrison, Jackson, Jefferson, Stone and Wilkinson counties is under a burn ban, which forbids any outdoor burning.