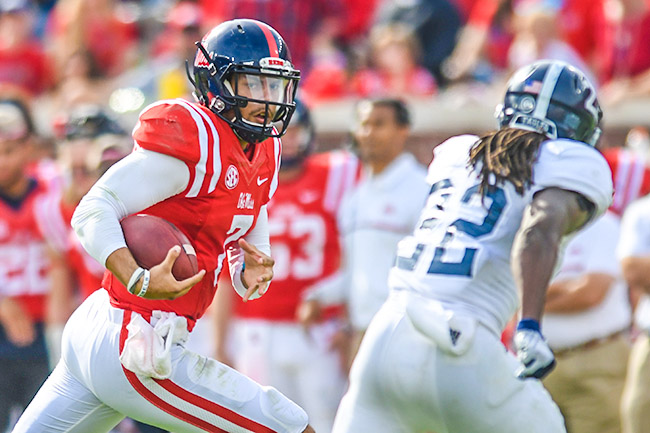 Exactly who Ole Miss turns to at quarterback with Chad Kelly out of the picture is still uncertain.

But one thing’s for sure: things will be different.

A freshman, either Jason Pellerin or Shea Patterson, will be taking the bulk of the snaps Saturday at Texas A&M (6:30 p.m., SEC Network). Patterson has been in line for a redshirt all season, but Ole Miss coach Hugh Freeze said he’s going to take his time thinking through whether to burn it with three games left in a season where the best-case scenario would be 7-5 if the Rebels (4-5, 1-4 Southeastern Conference) win out.

Meanwhile, Pellerin, who redshirted last season, has been Kelly’s backup all season. The 6-foot-4, 230-pound Pellerin been used primarily as a runner in the Rebels’ jumbo packages closer to the end zone and has attempted just 13 passes, completing five of them.

Freeze threw out the idea of letting receiver Markell Pack, tight end Evan Engram or former Lafayette High quarterback Jeremy Liggins, who’s now an offensive lineman, take snaps in certain packages in practice to see what they could do, but Freeze said Pellerin will prepare to be the starter against A&M (7-2, 4-2) by getting most of the first-team reps in practice this week.

But what a freshman will be asked to execute will be far less than what was asked of Kelly, a two-year starter who accumulated 7,632 yards of offense in 22 career games at Ole Miss and directed the SEC’s top passing offense before tearing his ACL last week against Georgia Southern.

“Will it be what Chad has done? Probably not,” Freeze said. “Regardless of who goes at quarterback, whether it is (Pellerin), Pack, whoever, Jeremy Liggins, Shea Patterson, it would be crazy for us to expect to carry the whole playbook into this game. We need to pick the things we really like and the things he feels good about in his preparation and go with those.”

Pellerin was just 1 of 5 passing in relief of Kelly on Saturday with an interception, but Freeze said he threw “two beautiful balls that both could’ve been caught,” including what would’ve been a touchdown that went through Engram’s hands. Teammates said just because Pellerin hasn’t been asked to throw much this season doesn’t mean he can’t.

But there’s also the matter of calling protections and changing them at the line based on what the defense is showing before the snap, something offensive lineman Javon Patterson said Kelly usually handled. That will be crucial this week going up against an A&M defense that’s second in the SEC with 26 sacks.

“I have great confidence in Jason,” Patterson said. “Jason is a strong kid. Strong arm and has great, tremendous character about himself. So I feel very confident in him.”

Engram said he’s willing to do “whatever I need to do,” but the senior knows he’ll spend most if not all of Saturday night blocking and catching passes from Pellerin or Patterson. Though some things will inevitably change, he expects the Rebels to be as aggressive as usual.

“I still think we still attack the way we have,” Engram said. “Jason’s another big arm. Just probably work on a little more accuracy. That’s one of the things he needs to work on the most. Honestly, I don’t think our offense changes at all. It will be a big thing to get him some confidence and make sure we play to him, but we recruit to have this type of offense and that’s not going to change.”