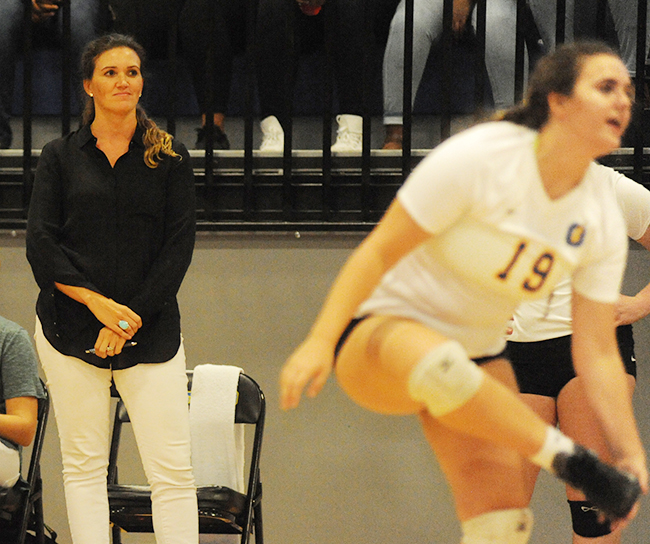 After 10 seasons at Oxford, Tara Ross, above, is retiring to spend more time with her family. Ross led the Chargers to their first state championship in 18 years this season. (Bruce Newman)

Like everyone else, a coach is not able to look into the future and see what is to come, which makes a decision to call it quits before their final season begins even more risky when in regards to knowing if they will go out on top of the mountain or with a whimper.

Tara Ross’ decision proved to be the right one.

After clinching a state championship for the first time in 18 years last week, Oxford volleyball’s coach is going out a winner. Ross announced her decision to retire from coaching after a 10-year career with the Chargers.

With a 6- and 7-year-old at home, who are not getting any younger, Ross wanted to be able to enjoy the moments that she still can in person and not miss while coaching in the afternoons inside the OHS gym. The time was right, and she made the decision to make this year her final season last year.

“We as a team knew that we should win (the state championship),” Ross said. “It was a goal we set back in June or July. It just never plays out the way you really want it to, or for me it doesn’t. It’s amazing that, obviously it’s for the girls, but that’s how it worked out.”

Ross’ career started at Meridian in 1999 where she was hired as the coach after getting her first teaching job. She coached the Wildcats two seasons and reached the semifinals during her first year. From there, she ended up at Olive Branch for two years and helped out with their middle school program.

Ross then changed from a teacher to a counselor, which she still is at Oxford Intermediate School, and stepped away from the game for four years. When she moved back to her home and alma mater of Oxford in 2007, she took up the job of coaching the Chargers.

During her tenure, Ross accrued a record of 104-103 as a head coach, but her final two seasons were her best as Oxford went 59-16 with a state championship. This past year was tough on Ross as she decided to keep her decision to make this year her last from the team as to not create an unwanted or unnecessary distraction.

“It’s not about me. It’s about my girls,” Ross said. “I just wanted them to focus on our goal for the year, which was win a state title. I felt bad because I think some kids knew and some didn’t. I just didn’t want it to be about (me retiring).”

The decision is not a shock to athletic director Mike Martin, whom Ross informed this spring that the upcoming season would be her last. There has not been an intense coaching search just yet, but it will pick up in the coming weeks. Ross quietly spread the word around during the season that there would be an opening come November.

Even though she is finished coaching, Ross is not going to shy away from attending volleyball matches and intends to be sitting in the gym as a spectator next fall.