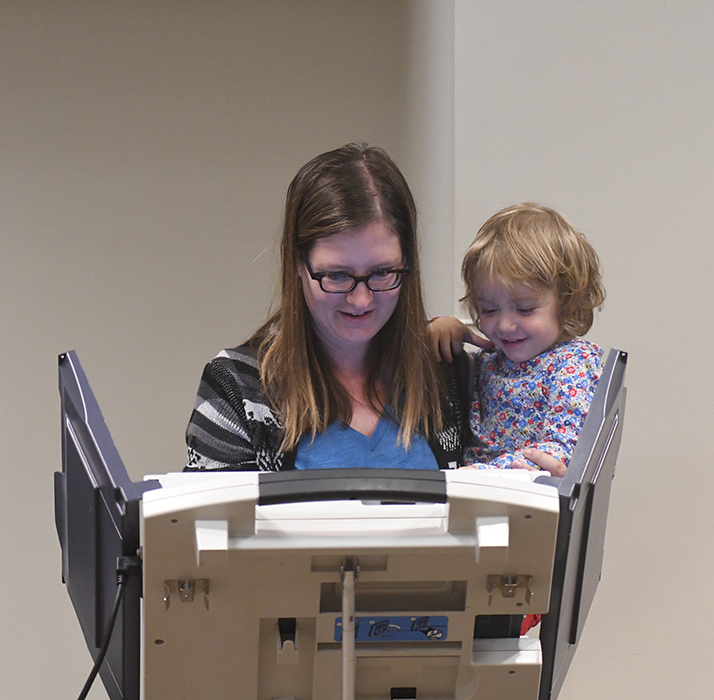 By Alyssa Schnugg and Alexis Neely

By 8:30 this morning, poll watchers reported more than 50 people being turned away from voting at the Oxford Conference Center precinct via an affidavit vote for various reasons that ranged from someone being at the wrong poll to someone’s name not appearing at all on the voter rolls.

Despite the busy start, Circuit Court Clerk Baretta Mosley reported no “major issues” this morning but said there had been some miscommunication.

“We’ve not had a complaint from the Conference Center from voters saying they have been turned away,” Mosley said at 9:30 this morning. “The complaint is coming from a poll watcher that does not understand the process.”

Mosley said people turning up at the wrong precinct must go to the correct one to vote, even if voting via affidavit.

“They are being directed to the correct precinct because if you vote using an affidavit at the wrong precinct, the ballot will not be counted,” she said. “The poll workers are provided with a master list of all voters and the precinct they are supposed to be voting in.”

Those who are not listed in the poll books or master voter list are being directed to the Clerk’s Office.

“I’ve had a few people whose addresses were incomplete or wrong and have been sent up here to get things corrected so their ballot will count,” she said.

Getting the jump on voting

Absentee votes for this election are on par with the 2012 election where 2,348 people in Lafayette County voted absentee. So far this year, 2,177 have voted absentee. Military personnel and overseas voters have until 7 p.m. to email or fax their ballots to the Clerk’s Office.

Oxford High School biology teacher Kendedrick Jones was one of the first to arrive at his precinct this morning. Jones said he wanted to go ahead and exercise his right early, because, like the rest of the elections he’s voted in, he’s just ready for it to be over.

However, Jones couldn’t deny this election is an important one.

“I think this one is more important because of what the candidates stand for and how they have portrayed themselves or how they’ve been portrayed by the media since this election began,” he said. “I wanna vote for someone that is for me as an individual.”

Due to the nature of this year’s election, Jones said there would probably be more people showing up at the polls compared to previous years.

And with the country being the closest it’s been to potentially having a woman in The White House, Jones knows this election could be one for the books, despite being ready for the election cycle to end.

“I think it would be a good opportunity to change history, but other than that, I’m really just indifferent,” he said.

One of the first few Ole Miss students to cast their ballot at the Oxford Mall precinct this morning was senior managerial finance and marketing major Danielle Gray, who has a busy day ahead of her and was sure to get her vote in early.

“I think voting is very important so I want to make sure I exercise my right,” Gray said. “I don’t want to be in line forever later tonight. I was just kinda freaked out about having enough time and how the lines would be.”

Though Gray also voted in and felt the 2012 election between current President Barack Obama and former governor of Massachusetts Mitt Romney was important, she said voting keeps getting more and more vital to our country.

“I think it’s one of those things where it’s going to affect everybody depending on who gets in office and the policies they enact,” she said.

The state’s chief elections officer, Republican Secretary of State Delbert Hosemann, said that after a relatively slow start in the pace of absentee voting in Mississippi, there was a surge in requests for absentee ballots last week. Voters of any age are allowed to vote absentee if they will be out of town on Election Day. People who are either disabled or at least 65 years old also may vote absentee, even if they will be in town for the election.

Four candidates are running for an open Supreme Court seat in the northern district: John Brady of Columbus, Bobby Chamberlin of Hernando, Steve Crampton of Tupelo and James T. “Jim” Kitchens of Caledonia. If nobody receives a majority, the top two will go to a Nov. 29 runoff.

Locally, two seats will be up for grabs in the Lafayette County School Board race. Incumbent Johnny Parker will have two challengers for his District 1 seat with Brent Larson and Bryan White. In District 2, incumbent Bob Colston will be challenged by Kimberly Harwell East.