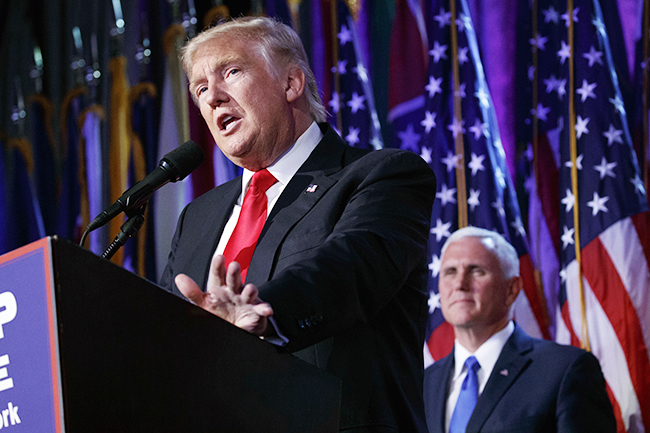 WASHINGTON (AP) — Donald Trump has been elected president of the United States.

The Associated Press has called the race at 1:29 p.m. central time. Hillary Clinton called Donald Trump to concede the race moments after the AP called the race, according to CNN.

The Republican nominee won Wednesday after capturing Wisconsin’s 10 electoral votes, putting him over the 270 threshold.

Voters eager to shake up the nation’s political establishment picked the celebrity businessman to become the nation’s 45th president.

Trump rode an astonishing wave of support from voters seeking change and willing to accept a candidate loose with facts and accused of sexual misconduct.

He upset Democrat Hillary Clinton, who would have become the first woman to serve in the Oval Office.

Trump struck a populist tone and placed a hardline immigration stance at his campaign’s heart.

Trump rose to political fame after questioning whether President Barack Obama was born in the United States. He will now follow Obama into the White House.

Donald Trump arrived at his election night headquarters after winning the state of Pennsylvania, just after 2 a.m. eastern time.

Trump’s motorcade traveled from nearby Trump Tower to the midtown hotel where thousands of his supporters and hundreds of reporters are gathered.

Trump is expected to address the crowd.

As the race lurched well past midnight, Trump inched closer to the 270 Electoral College votes needed to win the White House. Trump stood at 266 to Clinton’s 218.

Dow Jones futures and Asian markets tumbled, reflecting investor alarm over what a Trump presidency might mean for the economy and global trade.

A New York real estate developer who lives in a gold-plated Manhattan penthouse, Trump forged a striking connection with white, working class Americans who feel left behind in a changing economy and diversifying country. He cast immigration, both from Latin America and the Middle East, as the root of the problems plaguing many Americans.

A victory for Trump would threaten many of President Barack Obama’s major achievements. The Republican has vowed to repeal Obama’s landmark health care law, revoke the nuclear agreement with Iran and rewrite important trade deals with other countries, particularly Mexico and Canada.

If Trump finished off the stunning upset, he would govern with a Congress fully under Republican control. The GOP fended off a Democratic challenge in the Senate, winning key races in North Carolina, Pennsylvania and Wisconsin, and the party also extended its grip on the House.

Senate control means Trump will have great leeway in appointing Supreme Court justices, which could mean a major change to the right that would last for decades.

The mood at Clinton’s party grew bleak as Tuesday night wore into Wednesday, with some supporters leaving, others crying and hugging each other. Many top campaign aides stopped returning calls and texts, as Clinton and her family hunkered down in a luxury hotel watching the returns.

At 2 a.m., Clinton campaign chairman John Podesta told the crowd to head home for the night. “We’re still counting votes and every vote should count,” he said.

The crowd at Trump headquarters, their anger at Clinton unquenched, broke out in boos and chants of “Lock her up.”

Exit polls underscored the deep divisions that have defined the 2016 contest. Women nationwide supported Clinton by a double-digit margin, while men were significantly more likely to back Trump. More than half of white voters backed the Republican, while nearly 9 in 10 blacks and two-thirds of Hispanics voted for the Democrat.

Democrats, as well as some Republicans, expected Trump’s unconventional candidacy would damage down-ballot races and even flip some reliably red states in the presidential race. But Trump held on to Republican territory, including in Georgia and Utah, where Clinton’s campaign confidently invested resources.

The 45th president will inherit an anxious nation, deeply divided by economic and educational opportunities, race and culture. The economy has rebounded from the depths of recession, though many Americans have yet to benefit. New terror threats from home and abroad have raised security fears.

Clinton asked voters to keep the White House in her party’s hands for a third straight term. She cast herself as heir to President Barack Obama’s legacy and pledged to make good on his unfinished agenda, including passing immigration legislation, tightening restrictions on guns and tweaking his signature health care law.

But she struggled throughout the race with persistent questions about her honesty and trustworthiness. Those troubles flared anew late in the race, when FBI Director James Comey announced a review of new emails from her tenure at the State Department. On Sunday, just two days before Election Day, Comey said there was nothing in the material to warrant criminal charges against Clinton.

The Republican Party’s tortured relationship with its nominee was evident right up to the end. Former President George W. Bush and wife Laura Bush declined to back Trump, instead selecting “none of the above” when they voted for president, according to spokesman Freddy Ford.

House Speaker Paul Ryan, a reluctant Trump supporter, called the businessman earlier in the evening to congratulate him, according to a Ryan spokeswoman.

Trump set both parties on edge when he refused to say in the third and final debate whether he would accept the election’s results, citing with no evidence the possibility of a rigged outcome. His statement threatened to undermine a fundamental pillar of American democracy and raised the prospect that his fervent supporters would not view Clinton as a legitimate president if she won.

Asked Tuesday in an interview with Fox News if he would accept the election results, Trump continued to demur, saying “We’re going to see how things play out.”

Most problems that did pop up at polling places Tuesday appeared to be routine — the kinds of snags that come every four years, including long lines, machines not working properly and issues with ballots or voter rolls.

Even before Tuesday, almost 45 million people had cast ballots for president. Many expressed relief the end was in sight after an election season in which personal attacks often drowned out the issues.

Clinton has denounced Trump for calling Mexican immigrants “rapists” and promoting a ban on Muslims entering the U.S., and for his long line of remarks about women that culminated in an audio in which he bragged about grabbing their genitals. Her campaign was hoping high turnout among Hispanics push her over the top in states like Florida and Nevada.

“I grew up in a Hispanic family, and the way that Donald Trump has referred to illegal immigrants — being from illegal immigrants, I took that to heart,” said Angel Salazar, a 22-year-old sanitation associate from Oklahoma City. “I don’t like anything that he said. I don’t like his views. So I voted for Hillary Clinton because she supports us.”