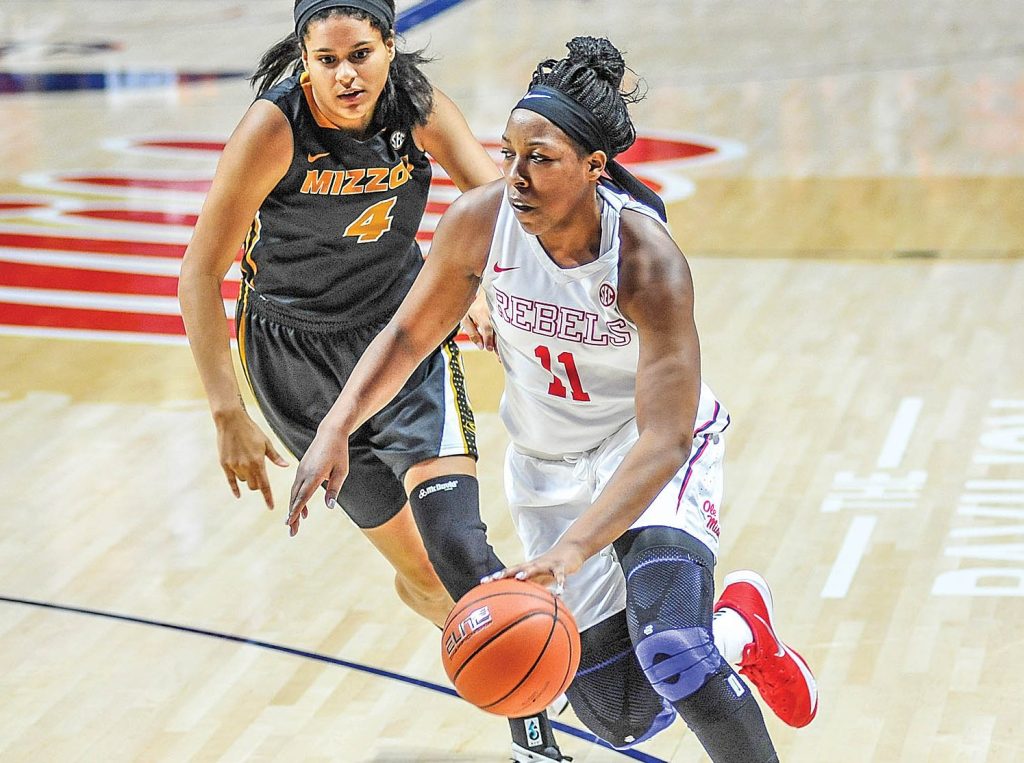 Senior forward Shequila Joseph (11) is one of six players 6-foot-1 or taller for the Ole Miss women’s basketball team. The Rebels open the season Friday against Southeastern Louisiana. (Bruce Newman)

The Rebels have six players on their roster 6-foot-1 or taller, an influx of size Insell is hoping first and foremost will help balance the offense for a team that relied heavily on its guards to do most of the scoring a season ago. Ole Miss will open the season against Southeastern Louisiana on Friday at 2:30 p.m. at the Pavilion.

“We’re going to throw the ball inside,” Insell said.

Ole Miss did that often in its final tuneup before things start for real in a 93-40 exhibition win over Mississippi College on Friday. Loyola Chicago graduate transfer Taylor Manuel, the tallest of them all at 6-4, went 6 of 7 from the field to finish with 16 points while 6-3 freshman Shelby Gibson and 6-3 senior Shequila Joseph combined for 13 points on 6 of 10 shooting.

Senior guard Erika Sisk led the Rebels with 19 points, but 73 percent of Ole Miss’ shots (46-63) came from two-point range. The Rebels shot 54 percent from the field in the win, the kind of higher percentage that Insell said has been consistent throughout the preseason because of his team’s ability to work inside-out.

“Every time the ball gets to the paint whether it be us driving the ball to the paint or us throwing the ball in the paint, something positive happens for us offensively,” Insell said. “We’re charting that and we’re able to show that to our team. The times we did not get the ball in there were not good possessions for us offensively either off the drive or off the pass to the post, but the times it got in there, something positive happened 95 percent of the time the other night. We’ve got to keep doing that.”

Said Sisk, “We haven’t had the great post players that we have.”

Senior Bretta Hart, sophomore Cecilia Muhate and freshman Kate Rodgers are also options down low, and Insell said who’s on the floor will depend on the matchup from one game to the next. The Rebels start with a pair of smaller teams in Southeastern Louisiana and Lipscomb on Sunday.

“Both of those teams aren’t near as big, so from a defensive standpoint, it’s a little concerning for us for how their style of play is,” Insell said.

That rangy presence is one of the reasons Insell believes his team can defy the preseason odds and make a run at the postseason. Media members and Southeastern Conference coaches both picked Ole Miss to finish last in the league after the Rebels did so last season with a 10-20 record that included a 2-14 mark in SEC play.

“I’ve been a part of three Elite Eight teams, and this team ranks up there in terms of depth and talent to those teams that have been to Elite Eights,” Insell said. “I’m not saying this team is going to do that. This team has to go out and prove themselves every game, but if we stay healthy, this team has a chance to do something real special this season.”