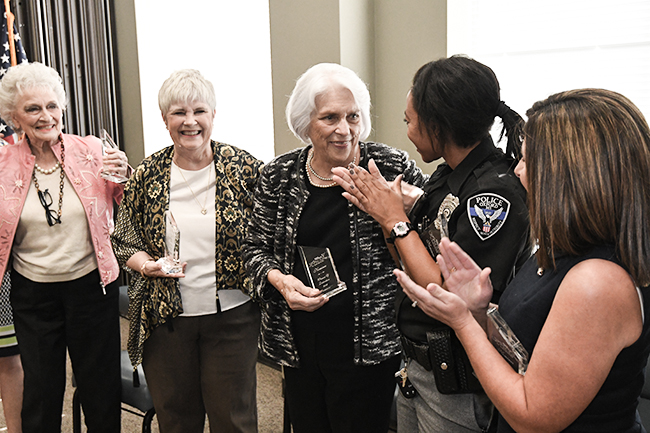 Gloria Kellum, center, is congratulated by, from left, Wanda Poole, Janis Miller, Brittany Gilleylen, and Shannon Ferguson after being named the recipient of the Girl Scouts' Women of Distinction award, at First Baptist Church in Oxford, Miss. on Wednesday, November 9, 2016.

The Girl Scouts Heart of the South recognized 10 women from the Lafayette, Oxford and university community Wednesday for their character and service as part of the sixth annual Women of Distinction luncheon. The luncheon spotlights women and their contributions made in their homes, churches, schools and communities.

Dr. Gloria Kellum was chosen from the 10 nominees and hailed as the Woman of Distinction of the Year.

Kellum began her tenure at the University of Mississippi in 1966 to help reestablish the Speech and Hearing Program and improve the lives of countless children and adults throughout America.

She became a national authority in treating individuals with craniofacial birth defects the impact speech, language and hearing. She helped begin the Cleft Palate Team in North Mississippi that provides services for children and their families.

She received the university’s Elsie M. Hood Outstanding Teaching Award and co-chaired the university’s Sesquicentennial Celebration. She was instrumental in establishing the William Winter Institute for Racial Reconciliation, the Gertrude C. Ford Center for the Performing Arts and developing the Ole Miss Women’s Council for Philanthropy.

Known for her motto, “Life is grand,” Kellum was a Girl Scout troop leader for her daughters in the late 1980s and early 1900s, her daughter, Kelly is now a troop leader.

“Gloria Kellum is a leader and a teacher in the true sense of the word,” read Haskell. “She inspires others with her zest for life, her inner strength and her determination to help others succeed.”

Kellum accepted the award with her young granddaughter by her side.

“That LOU community is a special place and is absolutely something that is a part of all our lives. It’s the reason most of us are here,” she said. “Thank you for caring deeply.”

Kellum thanked her family and Jim and Kitty Mann, whom she credited for bringing her to Oxford.

“I would not have come to Oxford, Mississippi, if Dr. James Mann not written a grant to establish the speech and hearing program in 1966,” Kellum said. “To God, I thank him for where we are and keeping us (family) together. For being in a country that’s free and being in America where we can all be what we want and need to be.”

The Women of Distinction award ceremony was held at First Baptist Church and was filled with those being awarded, their friends and family, and folks from the community who wanted to come out and show support.

Edith Kelly Green, first female African-American CPA in the state of Tennessee, founding member of the Ole Miss Women’s Council and owner of one of the most successful Lenny’s Sub Shop franchises in the country was the keynote speaker. An avid marathon runner, she spoke of Democratic presidential candidate Hillary Clinton’s “race,” to become the first woman president of the United States. She spoke of her determination, preparation and fortitude to finish the race, no matter the outcome.

“History has been made,” Green said. “And while we aren’t celebrating the first woman president today, we can acknowledge the progress we have made. … If you’re 60 years old and want to be a teacher, go do it. If you want to be president and you’re a (Girl Scout) Brownie, go do it. The limitations today for women are getting fewer and fewer.”

Also recognized Wednesday was 13-year-old Mattie Harwood as Girl Scout of Distinction. Harwood is active in her youth group at church and is in the Tiger Choir at School. SHe’s been a Girl Scout since she was in the second grade. She and her troop received the Girl Scout Bronze Award while raising awareness of the recycling program in Panola County. She received her Service Bar last year for volunteering at Merea Ministry. SHe is currently working on her Girl Scout Silver Award.