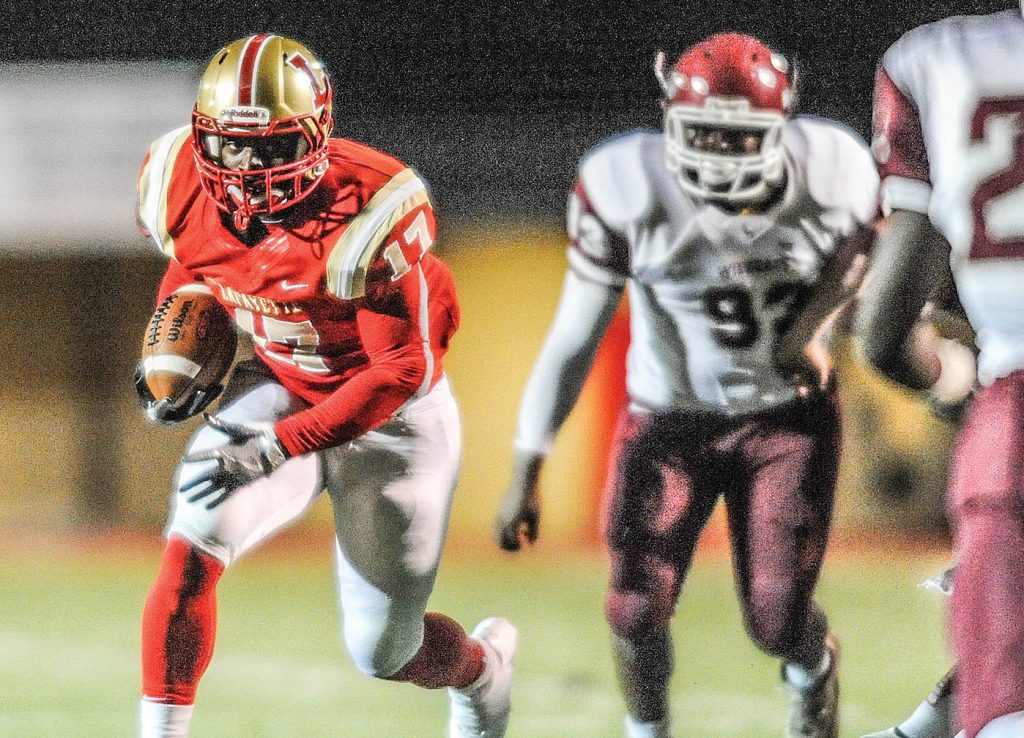 Jamarcus Quarles (17) and the rest of the Commodores will face Louisville for the second time this season Friday in the second round of the MHSAA Class 4A playoffs. Lafayette won 42-7 on Sept. 16. (Bruce Newman)

On Sept. 16, Lafayette hosted Louisville and routed the Wildcats 42-7. On Friday, the two teams meet once again at William L. Buford Stadium (7 p.m., 105.1 FM), but this time, it is for the right to advance to the quarterfinals of the MHSAA Class 4A playoffs.

Outside of confidence, there is not much Lafayette (9-2) can take away from their win eight weeks ago as this is a Lousiville team that won six of their final seven games after their loss to the Commodores.

“Louisville, I think, has improved all over the place,” Lafayette coach Michael Fair said. “They shuffled some guys around since the last time we played them. They’ve played three quarterbacks and different running backs, but they’ve settled on a young quarterback that has a lot of talent and a tailback that runs the ball hard. Even though they’re running the same type stuff, they’re a much better team than they were when we played them.”

In the first meeting, Lafayette dominated the Wildcats up front, rushing for 262 yards and three scores on the ground. Jamarcus Quarles had 24 carries for 190 yards and two of the touchdowns. Jamie Shaw accounted for the other touchdown. Through the air, quarterback Will Ard completed 8 of 9 passes for 134 yards and three touchdowns. With all the positives to pull from the game film, Fair and his staff are essentially starting from scratch with their game plan for Friday’s matchup.

In last week’s first-round game against Shannon, Lafayette controlled a potent offense with an impressive defensive performance and shut out a Shannon team that was averaging over 400 yards a game and 30.1 points a game. The Commodores will have to keep that level of play going against the Eagles (7-5), who are putting up 29.7 points a game themselves.

“I thought we played really well,” Fair said of his team’s performance on Friday. “Our defensive front was controlling the line of scrimmage from the first snap. When there wasn’t much room to run in there and our (defensive backs) were covering so well, I kind of knew in the first couple series that we were going to play really well defensively.”

Louisville kept their season alive, advancing to the second round after a 35-6 win over Raymond last week.