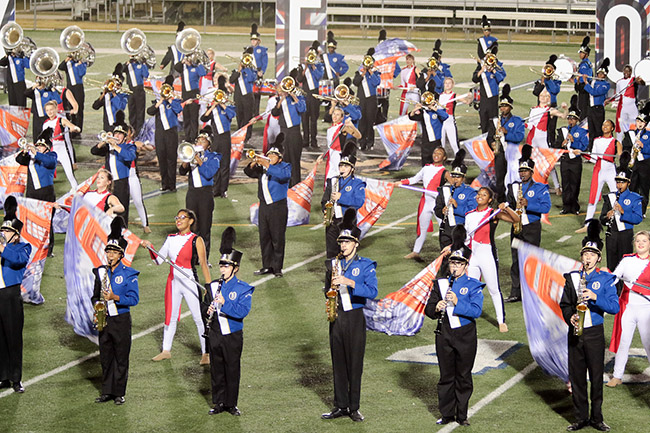 The Oxford Charger Band made school history on Oct. 22 at the MHSAA State Marching Band Championship, ranking fourth overall in Class 5A. This is the highest ranking the school has received.

In addition, the color guard was ranked second in the state, and the band was ranked in the top five for its general effect, visual effect, and music. Championships were held at Pearl High School.

Andrew Markworth composed this year’s show, entitled “Oxford to Oxford.” It traced the journey overseas of a young girl, played by Susanna Cassisa. She began her musical adventure in Oxford, Mississippi, and traveled to Oxford, England, before returning to the United States.

In order to qualify for state level competition, the band traveled on October 8 to the regional contest in Tupelo, where it earned a superior rating and the highest overall score of any band in the competition, regardless of class size.

This season the band also competed in the Southern Stars Marching Contest at Lewisburg High School and in the Mississippi Invitational at Tupelo High School.

In Tupelo, the band received first in all of the following categories: music, marching, color guard, and percussion. The Charger band was first in the 5A division and ranked second overall in the competition.

The 140 member band is under the direction of Mel Morse, Jared Brownlee, Joshua Hall, and Jessica Roebuck.

According to Morse, this was the most enjoyable show to work on of his career.

“The show gave the students a wonderful opportunity to be successful and they took advantage of it,” Morse said.