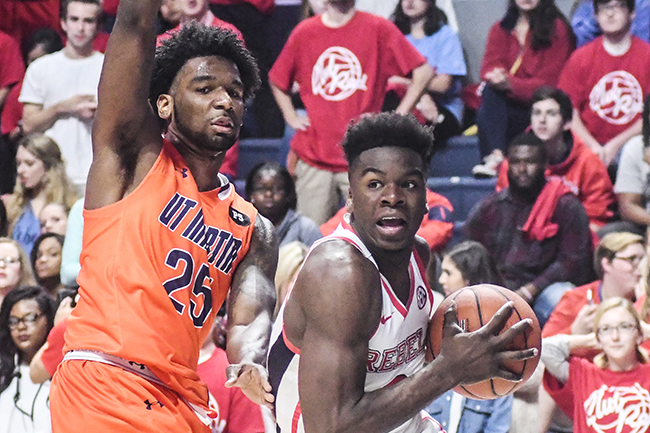 It wasn’t easy, but Ole Miss’ men’s basketball team started with a win.

Deandre Burnett led four Rebels in double figures with 23 points, and Ole Miss held off UT-Martin for an 86-83 win in both teams’ opener Friday at the Pavilion. Terence Davis added a career-high 19 points for Ole Miss while Rasheed Brooks and Cullen Neal had 12 and 10 points, respectively.

Senior forward Sebastian Saiz dealt with foul trouble throughout before fouling out midway through the second half with just five points and three rebounds in 17 minutes while the Rebels (1-0) once again struggled to hold on to the ball, committing 24 turnovers after coughing it up 20 times in last week’s exhibition.

But the Rebels forced 17 turnovers of their own, the final one coming when the Skyhawks (0-1) had the ball in the final seconds with a chance to take the lead. Burnett hit a pair of free throws to give Ole Miss the three-point lead before Jacolby Mobley missed a 3-pointer as time ran out.

Matthew Butler had a game-high 25 points for UT-Martin. Mobley had 17 points while Javier Martinez finished with 11 points and eight of the Skyhawks’ 40 rebounds. Justas Furmanavicius had a game-high 13 boards for Ole Miss to go with seven points.

Burnett and Davis, who combined to go 14 of 24 from the floor, helped Ole Miss rally in the second half after trailing 42-39 at the break. The Rebels led by as many as 11 with 4:14 left before hanging on down the stretch.

Ole Miss shot 48 percent from the field and held UT-Martin to 27.9 percent shooting in the second half.