Oxford DAR to receive plaque from the city 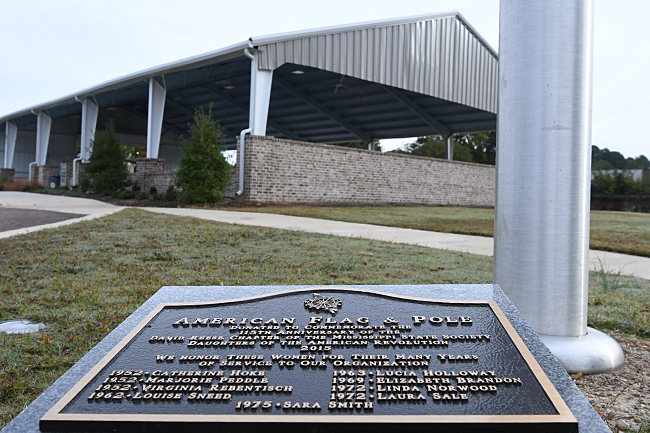 Bruce Newman A flag pole outside the Pavilion will be dedicated on Saturday.

Thanks to the David Reese Chapter of the Daughters of the American Revolution, the city of Oxford has a stately new flagpole and two large new American flags.

This DAR chapter is the second oldest in the state of Mississippi and only 10 years younger than the National organization itself.

A ceremony commemorating the 115th anniversary of the Oxford DAR chapter will be held Sunday, beginning at 2 p.m. at the Oxford City Pavilion (the old National Guard Armory) at University Avenue and Bramlett Boulevard.

A DAR fundraiser this year netted over $4,000 to purchase the new 35-foot internal halyard pole and two 5×8 American flags. The city provided the installation and LED lighting for the new flag pole, and a handsome granite slab for the plaque.

Girl Scout Troop 13213, led by Abi Rayburn, will be retiring any worn or damaged American flags immediately following the donation ceremony. These Girl Scouts are being trained in the proper disposal procedure for honorably retiring official flags. A military-style bugler will sound taps at the close of the ceremony.

If any citizen or business has a worn or damaged flag, please bring it to the ceremony on Sunday, or arrange for pick-up in advance by emailing Sally Malone, current Regent of the David Reese chapter: sallyj.malone@gmail.com.

All citizens are invited to attend. A reception will follow.