Ole Miss’ defense shows up in second half, shutting down A&M offense 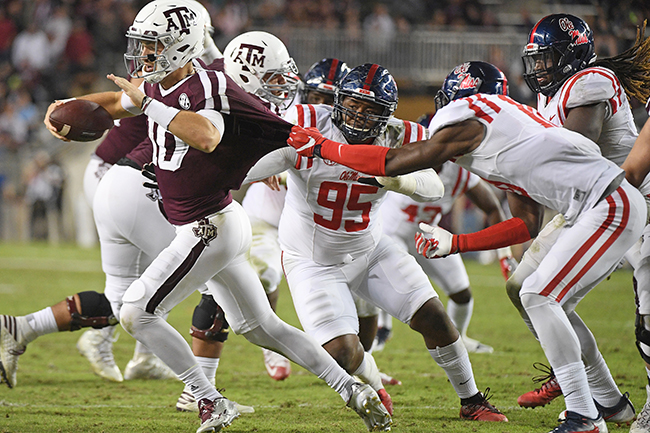 They have been the sore spot for Ole Miss all season, but on Saturday night the Rebel defense showed up when they needed to for two quarters. After giving up 21 points to No. 8 Texas A&M in the first half, Ole Miss held the potent Aggie offense to just one touchdown the final 30 minutes of the game in the Rebels’ upset victory at Kyle Field.

The big plays were still there for Texas A&M as the Ole Miss secondary missed assignments or blew coverages all together, but the mistakes were not as glaring as they had been the previous nine games of the season. The defensive front looked like the Landshark defense of old as Fadol Brown led the way with a team-high six tackles, tying with linebacker DeMarquis Gates.

“There were a few explosive plays in the first half that shouldn’t have happened,” defensive coordinator Dave Wommack said. “I loved the way our kids came out and battled in the second half. That hadn’t exactly been our forte but last couple of weeks it has been. We had to check a couple things to adjust to what they were doing.”

The first half was as par for the course a performance as Ole Miss could turn in as quarterback Jake Hubenak threw for 154 yards, completing nine of 14 passes for a touchdown in the first two quarters. His biggest pass came in the second quarter after the Rebel secondary had a blown coverage, leaving Christian Kirk wide open for a 69-yard catch to set up a Keith Ford touchdown run the following play. The Aggies rush for only 129 yards on 34 carries and accounted for two touchdowns, both coming from Ford in the first half. Trayveon Williams led the Aggies with 72 yards on 17 carries.

It was a different story for in the second half as Hubenak struggled, throwing for only 59 yards and completing seven of 14 passes for one touchdown and one interception. The turnover was the biggest play for the defense as defensive back Deontay Anderson made the play of his season, picking off Hubenak with 16 seconds left to seal the victory for Ole Miss.

“Our defense played a heck of a game,” quarterback Shea Patterson said. That’s what really got us the momentum.”

The fourth quarter saw Ole Miss score 23 points, 10 of them unanswered to close the game after the defense forced Texas A&M to punt and Hubenak to toss the interception on their final two possessions of the game.