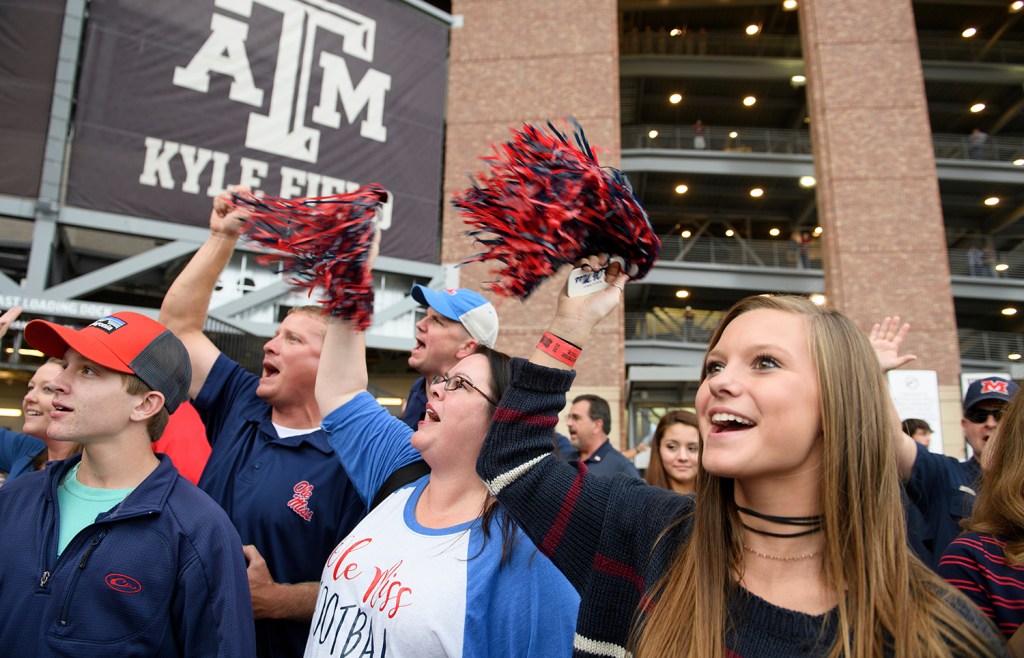 The Rebels win 29-28 after a field goal in the final minute. Patterson led Ole Miss into scoring position.

Gary Wunderlich’s field goal with 37 seconds left gave the Rebels the win. The 15-point second half comeback was the largest of the Hugh Freeze era.

Patterson was spectacular in the second half and the announcers were saying his style of play reminded of Johnny Manziel, who won a Heisman. Patterson, in his first collegiate game, threw for 338 yards, on 25 of 42 passing, with two touchdowns and one interception.

Shea Patterson is starting to find himself this half. The true freshman kept the drive alive nearly by himself with runs and then hits Van Jefferson for a 32-yard touchdown pass. It is a two-point game with a little over five minutes remaining. No. 8 Texas A&M 28, Ole Miss 26 5:15 4Q

Texas A&M answers with an 11-play drive that goes 76-yards and is capped by a 13-yard touchdown pass from Hubenak to Josh Reynolds. The failed two-point try by Ole Miss hurts as it is now a two-score game with less than seven minutes left. No. 8 Texas A&M 28, Ole Miss 19 6:41 4Q

Ole Miss gets a good drive on offense and finds themselves once again inside the Aggies 10-yard line. And once again, Pellerin comes in to replace Patterson and is sacked and fumbles the ball. A&M recovers it for a momentum killer. No. 8 Texas A&M 21, Ole Miss 6 6:24 3Q

Ole Miss attempted an onside kick to start the second half and jumpstart the offense but the Aggies recovered with short field position. Texas A&M had a 4 & 1 but the Ole Miss defense held for a turnover on downs. Rebel ball at their 31. No. 8 Texas A&M 21, Ole Miss 6 12:57 3Q

Drive went forward, thanks to Patterson’s legs, but then went backwards on a poor decision by Patterson trying to avoid a sack. Rebels punt it away. Texas A&M decides to let the clock run out and we have reached halftime. No. 8 Texas A&M 21, Ole Miss 6.

Defense holds and gets some help with some offensive penalties on the Aggies. Ole Miss will have about 3 minutes to try and get some more points before halftime. No. 8 Texas A&M 21, Ole Miss 6 3:06 2Q

Ole Miss drive stalls with their first 3 and out of the game. Wunderlich punts it directly to Kirk but there is no damage done. No. 8 Texas A&M 21, Ole Miss 6 5:53 2Q

More of the same as Patterson airs it out to Stringfellow but overthrows him. Evan Engram is unable to convert on third down, but a personal foul penalty on Texas A&M keeps drive alive. Rebels attempt to try and have more success running the ball but the Aggie defensive front is starting to fill up holes. Patterson uses his legs once again to convert another third down and found A.J. Brown a couple times for the first time tonight, including a 29-yard gain for a first down. The offense was moving along, with a first and goal but Pellerin comes in and can not do anything on the first two plays. Patterson attempts to run on third down but is stopped. Wunderlich hits another 25-yard field goal. No. 8 Texas A&M 14, Ole Miss 6 7:45 2Q

Texas A&M starting to have success and opening things up against the porous Ole Miss defense. Aggies march 89 yards and Keith Ford caps it with a 1-yard run. No. 8 Texas A&M 14, Ole Miss 3 13:55 2Q

Shea Patterson gets his first career completion, a 14-yard pass to Evan Engram, on Ole Miss’ second possession of the game. Jason Pellerin entered the game for the first time for two plays. Akeem Judd is getting the run game established early, which will be big to keep balance and the defense off of Patterson. Rebels at the Aggie 7 yard-line and there is an injured Texas A&M player down. Ole Miss 0, No. 8 Texas A&M 0 6:29 1Q

Texas A&M’s opening drive stalled when the Aggies went for it on 4th and 4 and a Jake Hubenak pass falls incomplete when Christian Kirk can’t haul it in. Turnover on downs and a good opening stop for the Ole Miss defense. D.J. Jones had a potential sack earlier in the drive but Hubenak escaped for a 22-yard run to keep it alive. Ole Miss 0, Texas A&M 0 10:50 1Q

The Shea Patterson era officially begins as Ole Miss started with the ball. On the first play of the game, Patterson ran for 16 yards but a penalty and a bad snap stalled the drive. He also had a nice throw dropped by Stringfellow on his first drive. Rebels punt it away. Ole Miss 0, Texas A&M 0 13:02 1Q

It’s Ole Miss vs. No. 10 Texas A&M today and we get to see the debut of freshman quarterback Shea Patterson, one of the most sought after recruits of 2016.

We will have live score updates and analysis tonight from College Station for the Rebels and Aggies so you can bookmark this page and return at game time tonight.

No. 10 Texas A&M will start a backup quarterback vs. Ole Miss tonight and Ole Miss may start a backup or redshirt freshmen phenom Shea Patterson, making for a captivating contest.

The Aggies will go with Jake Hubenak, who threw for 222 yards with two touchdowns and an interception after taking over after Knight injured his shoulder in a loss to Mississippi State on Saturday that knocked Texas A&M out of the College Football Playoff top four.

“For the most part Jake was effective in second half,” coach Kevin Sumlin said. “Eleven for 17 for a guy who had to go find his helmet to get in the game. Go run into a game like that, down two touchdowns on road, to give us an opportunity at the end of the game says a lot about him but also says a lot about communication between him and the offensive staff at that time. That will continue to get better.”

It will be the second career start for Hubenak , who got his first in A&M’s bowl game last season after both of the team’s top quarterbacks transferred in December.

The quarterback situation for Mississippi is a lot less clear with coach Hugh Freeze refusing to name a starter this week in the wake of Kelly’s season-ending knee injury.

Freeze did say that freshman Jason Pellerin  who filled in for Kelly after he was injured, would get most of the snaps in practice this week. But Freeze announced on ESPN late Friday that the redshirt would be pulled off Shea Patterson and that the prized freshman will play tonight.