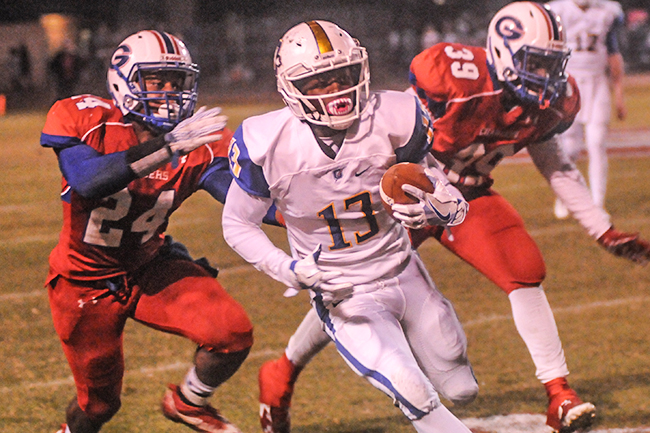 Oxford High's Barry Flowers (13) is chased by Grenada High's Isiaha Triplett (24) and Zkhyree Hemphill (39) in MHSAA Class 5A playoff action at Grenada High School. It was announced on Thursday that Oxford will be moving up to Class 6A next August. (Jake Thompson)

GRENADA — When Chris Cutcliffe saw the chance to snag momentum and keep on his sideline, he did not hesitate to do so. The first-year head coach at Oxford made crucial calls at key moments of the Chargers’ MHSAA Class 5A playoff opener against Grenada and every one paid off. The result was a 34-16 win for Oxford at Grenada High School, sending the other Chargers home until next August.

Oxford (8-4) advances to the quarterfinal round next Friday where they will host Region 1-5A champion West Point, who defeated Holmes County 41-7.

The game plan heading into Friday’s contest was simple – whichever team could control the clock and slow down the other team’s run game would most likely find themselves still playing next week. Oxford used lengthy drives fueled by their rushing attack of Hiram Wadlington and Lance Stewart, while the defense stifled Grenada’s ground offensive.

“I think we were able to run the football a lot better than we were a week ago,” Cutcliffe said. “It was a big point of emphasis for us and I think what was what really won the game for us.”

Oxford had four drives that lasted eight plays or longer, including 12-play drive. Two of the possessions resulted in touchdowns. The two longest drives of the four, a 10- and 12-play drive, did not net any points as they resulted in an interception and a missed 23-yard field goal, respectively. The play of Wadlington and Stewart is what aided in keeping Oxford on the field. The duo rushed for 208 yards on 36 carries and three touchdowns.

It was the play of the defense that helped keep Grenada (9-3) off balance offensively but the Chargers were the first to strike on the scoreboard. Grenada scored on their second possession with a 58-yard touchdown pass from quarterback CJ Avery to receiver Kevarius Brown, giving the Chargers a 7-0 lead midway through the first quarter.

Oxford responded with a nine-play, 71-yard drive that ended with Wadlington scoring his first touchdown of the night on a nine-yard run to knot the game 7-all late in the first quarter. After Avery and Oxford quarterback John Reese McClure each traded interceptions, the Chargers used some creating play-calling from Cutcliffe to jump ahead for good. McClure handed the ball off to C.J. Terrell, who then passed it back to McClure who was streaking down the sideline for an 18-yard touchdown pass late in the second quarter.

Cutcliffe wanted to seize the newfound momentum an called for an onside kick on the ensuing kickoff, which Oxford executed and recovered to keep possession. The 42-yard drive was capped by McClure throwing his only touchdown of the night, a 14-yard pass to Preston Perkins for the 21-7 lead with less than three minutes remaining in the half.

“We wanted to be aggressive,” Cutcliffe said. “I think it really came down to execution. Our guys executed in all three phases exceptionally well. …(The onside kick) was something we’d seen on film and if we got what we wanted, we wanted to do it. We got the look we liked and went for it.”

The gambles did not stop with the onside kick as Cutcliffe decided to keep his offense on the field, facing a 4 & 1 and leading Grenada by five, and went for the first down. His faith in his offense was rewarded as Wadlington found a hole provided by his offensive lineman and ran for 45 yards to pick up his second touchdown of the night, making it a 27-16 Oxford lead in the third quarter.

Oxford’s defense rose to the challenge of stopping a potent Grenada offense, specifically their running game. The Chargers held Avery and running back Deon House to less than 1oo yards each. Avery picked up 49 yards on the ground while House rushed for 99 yards. The only other touchdown Oxford  gave up was a 14-yard pass from Avery to Will Baker in the final minute of the first half.

“I thought our defense played exceptionally well,” Cutcliffe said. “We held them three points in the second half, which was huge. I was really, really proud of our defense.”