Shea Patterson has record night, leads Rebels past No. 8 Texas A&M in debut 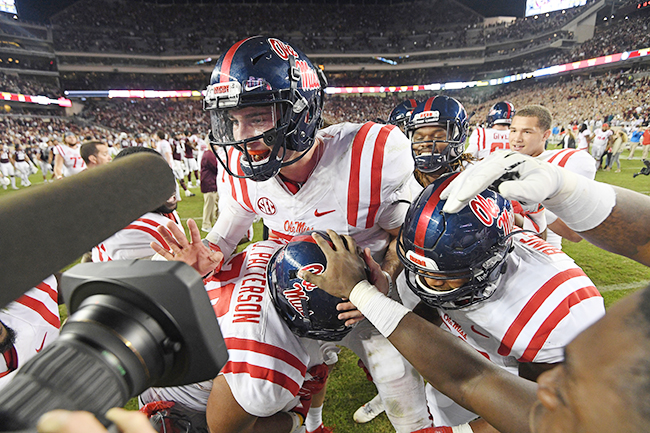 It was supposed to be about Chad Kelly and Trevor Knight. It was supposed to be about a showdown for a potential berth to the Southeastern Conference championship game. It became about Shea Patterson and his Ole Miss debut. The true freshman had his redshirt removed after Kelly’s season-ending knee injury against Georgia Southern last week and was thrown into a game against a Top-10 SEC opponent on the road.

Patterson did not disappoint in front of an announced crowd of 104,892, leading Ole Miss to a 29-28 win over No. 8 Texas A&M at Kyle Field in College State on Saturday night. In his first collegiate game, Patterson went 25 of 42 for 338 yards and two touchdowns and one interception. He also ran 15 times for 64 yards. The passing yards and total yards (402) by Patterson were school records for a freshman.

The second half was all about Patterson, who did everything he could with his arm, and his legs, to keep the Rebels alive as they trailed 21-6 at halftime. After being shutout in the third quarter, Ole Miss (5-5, 2-4 SEC) rattled off 23 points to complete the improbable comeback, keeping their bowl hopes alive with two games remaining. The final two quarters saw Patterson throw for 246 yards and the two touchdowns. Perhaps the biggest passes of the night came in the fourth quarter. Patterson hit De’Amorea Stringfellow for a six-yard touchdown after scrambling out of the pocket then rolling all the way to the other side of the field to find the wide open Stringfellow in the end zone to make it a 21-13 Texas A&M lead with 14:50 left. The next Rebel possession saw Patterson hit Stringfellow again for 40 yards with a one-handed catch, which set up a 21-yard touchdown run by Akeem Judd the following play to make it 21-19 after a failed two-point try with 12 minutes left.

Texas A&M responded with a touchdown to make it a two-score game and a 28-19 lead but Patterson was not finished. He and Stringfellow connected once more in the endzone, this time for 32 yards and brought the Rebels back to within two points with 5:17 left.

What has been the low spot for Ole Miss all season became the biggest factor of the game as the Rebel defense stopped Aggie quarterback Jake Hubenak and the offense to give Patterson the ball back with less than four minutes remaining. Ole Miss chewed 3:07 off the clock and kicker Gary Wunderlich hit a 39-yard field goal, his third of the night, for the winning margin.

Texas A&M (7-3, 4-3) still managed to have their successes as Hubenak was 16 of 27 for 213 yards and two touchdown and one interception in his first career debut after Trevor Knight suffered a shoulder injury against Mississippi State last week. Running back Keith Ford rushed for 27 yards on eight carries and two touchdowns for the Aggies.