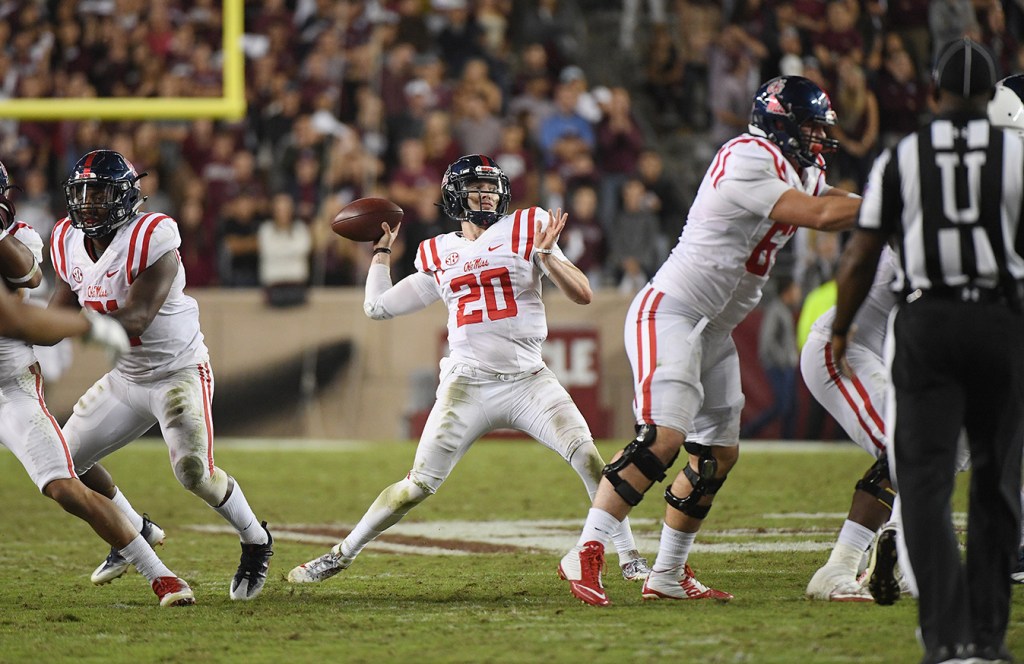 COLLEGE STATION, Texas — Ole Miss’ offense did just enough to keep Texas A&M guessing with a patchwork offensive line that held its own against one of the better defensive fronts in the Southeastern Conference.

The Rebels again started freshmen Greg Little and Alex Givens at tackle with Rod Taylor unavailable. Ole Miss played three centers with Sean Rawlings (ankle) healthy enough to go after missing last week’s game against Georgia Southern, but Robert Conyers’ chronic knee pain flared up and forced him out in the second half.

“Credit to what (offensive line) coach (Matt) Luke to what he’s done with those guys with all the injuries we’ve had, and even the guys we’re playing, a bunch of them are banged up,” offensive coordinator Dan Werner said. “It’s tough, and that’s one of the best defensive fronts you’ll see. There’s three, maybe four, guys on that (line) that will play on Sundays.”

A Texas A&M front that has All-American end Myles Garrett and pass-rush specialist Daeshon Hall created its usual problems, sacking Shea Patterson three times and tallying nine tackles for loss. But the Aggies began the day leading the league in tackles for loss (nine per game), so it wasn’t anymore than usual.

Ole Miss kept A&M honest enough with 152 rushing yards — the second-most for the Rebels in an SEC game this season — including 27 of the 36 yards the Rebels had on their final drive to set up Gary Wunderlich’s winning field goal. Akeem Judd led the way with 100 on 20 carries.

“There were some more rush yards there that we probably left on the table with a few calls we had,” Freeze said. “They caught us in a couple bad calls with the looks they had. That defensive front is very good and very athletic, but we ran it enough to stay balanced for sure.”

The Rebels didn’t get it after a kick that went too far. A&M instead started with the ball near midfield, but the defense kept the decision from backfiring.

The Aggies moved to Ole Miss’ 31 in five plays and decided to go on fourth-and-short. The Rebels stuffed quarterback Jake Hubanek on a sneak to get the ball back for the offense, and Ole Miss held the Aggies to 122 yards in the second half.

“I think Carlos Davis was going to win the 10-yard (sprint), but we kicked it like 15,” Freeze said.

Derrick Jones got his first start of the season at cornerback and finished with three tackles. Jones, who’s played in all seven games since returning from serving a suspension for a violation of team standards, got the nod over redshirt freshman Jalen Julius, who started all but one of the first nine games.

Shea Patterson is the first freshman to start at quarterback for Ole Miss since David Morris did it in 1998. … The win is the Rebels’ first over an SEC West team this season. … The 21-6 halftime deficit marked the first time this season the Rebels trailed at the half. … Ole Miss improved to 34-9 under Freeze when scoring first.