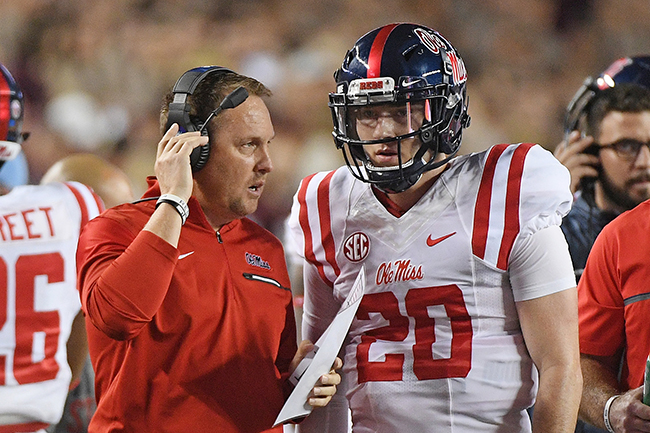 COLLEGE STATION, Texas — If that’s a sign of things to come, whoa.

Of course, we weren’t supposed to see this until next year. Shea Patterson wasn’t playing this year until Hugh Freeze decided he was.

When Ole Miss confirmed a week ago Chad Kelly’s knee injury was a torn ACL and a torn lateral meniscus, the quarterback job turned into a battle between two freshmen, Jason Pellerin and the most-ballyhooed quarterback the Rebels have signed in the modern era, despite the smokescreens Freeze tried to make everybody believe.

All the closed practices and limited media availability during the week told you something was up and that perhaps maybe the decision of whether to burn Patterson’s redshirt for the sake of bowl eligibility wasn’t as tough as Freeze led on. He essentially admitted as much after turning to the future showed a glimpse of what the future could look like for the Rebels in a 29-28 comeback win at Texas A&M on Saturday that had players and coaches as giddy as they’ve been in awhile amid a disappointing season.

“I told him (he was starting) Friday,” Freeze said. “I knew before that, but I told him Friday.”

Freeze said he really felt comfortable about handing the offense over to Patterson once Patterson and his family were good with pulling the redshirt off this late, but c’mon. What five-star recruit with hopes of being in the NFL in three or four years doesn’t want play?

“It was never about the redshirt,” Patterson said. “It was about the seniors. For John Youngblood and Chad Kelly and all those guys. I’m just happy to have done it for them.”

And do it Patterson did.

The youngster with mechanics beyond his years and a lightning-quick release along with mobility to boot seemed to be anything but fazed by the 100,000-plus fans packed into Kyle Field. Freeze talked afterward about how he usually comes away from scouting recruits at high school games feeling like they’re anything but a sure thing.

“I got to go watch him play (in high school), and I left that game kind of with a man crush on him,” Freeze said. “I mean that in the friendly version. I just saw a kid that, man, he just had such poise.”

In a state where everything is bigger, they say, the moment wasn’t too big for Patterson, who went 25 of 42 for 338 yards with two touchdowns and a pick, leading the Rebels back from a two-touchdown halftime deficit.

He displayed his athleticism on his first scoring toss, channeling his inner Johnny Manziel — “my favorite player growing up,” Patterson said — to avoid a heavy rush and scramble back across the field before finding Damore’ea Stringfellow all alone in the end zone. He then calmly delivered a 32-yard scoring strike to Van Jefferson when the Rebels had to have it down nine midway through the fourth quarter.

“He’s put in a lot of work, so we knew he was going to put in some special things today,” Jefferson said.

The defense got Patterson the ball back one last time with a little more than 3 minutes left with a chance to go win it, and he directed the offense 39 yards, including sidestepping the rush and running 13 yards to get the Rebels in range for Gary Wunderlich’s winner.

“The guy just makes plays and really doesn’t get rattled by a lot,” Freeze said.

Freeze correctly opined that he was going to be criticized regardless of whichever decision he made on Patterson. Playing him now means he the gives Ole Miss the best chance to win now, but Freeze’s decision also made it clear there’s no waiting around for the future.

And if first impressions count for anything, it looks awfully bright.