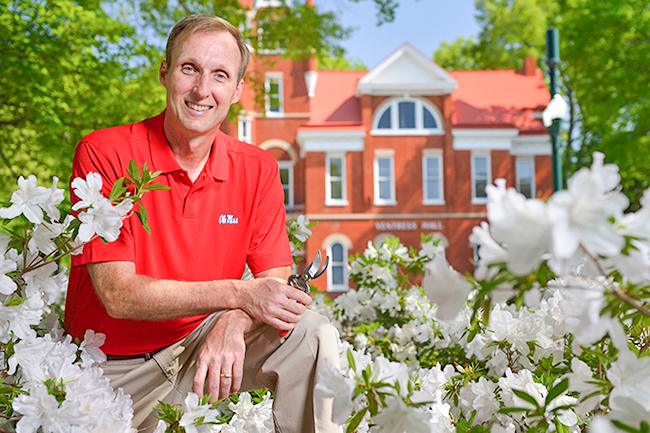 The man in charge of keeping the “Most Beautiful Campus in America” looking photogenic has received yet another major accolade.

Jeff McManus, UM director of landscape, airport and golf operations, has been honored with the Professional Grounds Management Society’s President’s Award. McManus was recognized Oct. 21 at an awards banquet in Louisville, Kentucky, for outstanding service and contributions to the group, particularly for his pro bono leadership education programs for the group’s members and coordination of its promotional videos.

He said the award is a tremendous honor that he’s very proud to receive.

“PGMS does an excellent job of professionally developing its members, and I am proud to have been a part of its education programs nationwide,” McManus said. “I would like to thank PGMS past president John Doiron and all those across the country who participated in the PGMS projects over the year.”

He also thanked fellow UM Landscape Services employee Jimmy Dickerson, who coordinated and developed the video project that was recognized.

“Jimmy’s high-quality work allowed us to professionally showcase and engage our industry to a wider audience,” McManus said.

McManus has been the mastermind for keeping the Ole Miss campus, more than 1,500 acres, looking gorgeous. Those beautification efforts have been nationally recognized four times during his tenure, including being named Most Beautiful Campus by the Princeton Review, Professional Grounds Management Society and Newsweek.

Most recently, USA Today’s Reader’s Choice travel awards contest has named UM the nation’s most beautiful campus, while Thrillist named the university on its unranked list of the 20 most beautiful public college campuses.

Earlier this year, McManus, also was named the Auburn University Department of Horticulture’s outstanding alumnus for 2016.

Besides maintaining the beauty of Ole Miss, McManus also does training on leadership development and has written two books, “Pruning Like a Pro” (2015) and “Growing Weeders Into Leaders” (2016).

McManus is very deserving of recognition because of his excellent leadership, said Larry Sparks, UM vice chancellor for administration and finance.

“Under Jeff’s guidance, the landscape, airport and golf course areas have flourished,” Sparks said. “I think one of the main reasons for this success has been Jeff’s focus on not only the job or individual tasks, but on developing people.”

UM Chancellor Emeritus Robert Khayat hired McManus 16 years ago, following a national search to find the best landscape manager in the business to help turn UM into a five-star property. He found McManus, who had made a name for himself after leading landscape efforts at two large resorts in Florida, Grand Cypress Resort in Orlando and Turnberry Isle Resort and Club in North Miami.