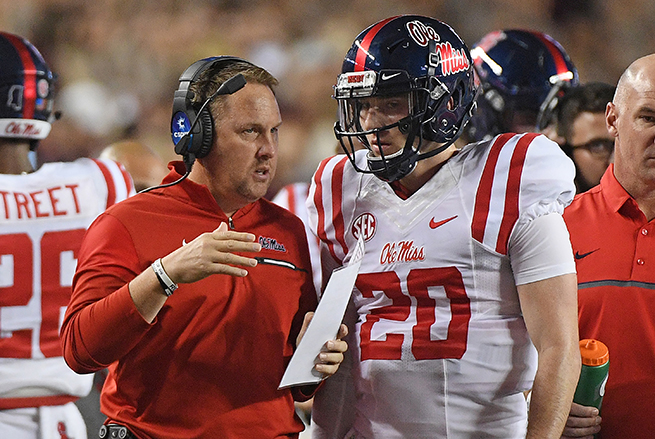 Ole Miss head coach Hugh Freeze, left, talks with quarterback Shea Patterson (20) during the first half against Texas A&M in College Station, Texas, on Saturday. Patterson earned his first career start after having his redhsirt pulled for the final three games. (Thomas Graning)

Hugh Freeze really wants to send this senior class out with a bowl game.

Ole Miss’ coach wasn’t sure he could do that without playing his prized freshman quarterback.

That’s the main reason Freeze on Saturday decided to turn the offense over to Shea Patterson, whose collegiate debut matched the hype as the nation’s No. 1 quarterback prospect in this past year’s recruiting cycle accounted for 402 yards and two touchdowns in rallying the Rebels to a 29-28 win at Texas A&M.

Freeze talked during the week about weighing what’s best for his team and what’s best for Patterson with the Rebels trudging through a sub-.500 season yet still having the chance to salvage a bowl berth. Freeze is paid $4.7 million to win as many games as possible this season, and he decided soon after finding out Chad Kelly’s knee injury would sideline him for the rest of the season that Patterson was the Rebels’ best shot regardless of how reluctant he may have been to pull Patterson’s redshirt with three games left.

Not playing Patterson, Freeze said, would’ve been a disservice to the Rebels’ seniors, most of which are members of Freeze’s first full recruiting class after taking over an Ole Miss program coming off a 2-10 season in 2011.

“I can’t preach team all year long and then look at Evan Engram, Fadol Brown and everybody else and say, ‘Hey, you know what, I’m not going to give you the best chance to win in your last three games,’” Freeze said. “I just can’t do that. Once Shea and his family were on board, it was a pretty easy decision.”

Engram, Tony Conner, Quincy Adeboyejo and Derrick Jones are still around as significant contributors from that 2013 signing class and have been a part of 32 wins in their careers while Carlos Davis, Robert Conyers, Issac Gross and John Youngblood have been around even longer. Kelly, Brown, Akeem Judd and D.J. Jones transferred in and have been a part of a 10-win season and a Sugar Bowl win.

Patterson helped the group get its latest win, throwing for 338 yards with both of his scoring tosses coming during the Rebels’ 23-point fourth quarter Saturday and leading one final drive to get Ole Miss in range for Gary Wunderlich’s winning field goal.

Yet when teammates tried to carry him off the field on their shoulders, Patterson refused.

At 5-5, the Rebels need to beat either Vanderbilt this Saturday (7 p.m., SEC Network) or Mississippi State the next to make it to the postseason.

“We want to send these seniors that have turned our program around out in a bowl game, so we’ve got some work to do,” Freeze said.

Ole Miss has turned to its talented youngster for help.

“These last two games, we’re going to come out and play and try to get to a bowl game with Shea,” receiver Van Jefferson said. “We’re just going to follow Shea’s lead and go behind him.”