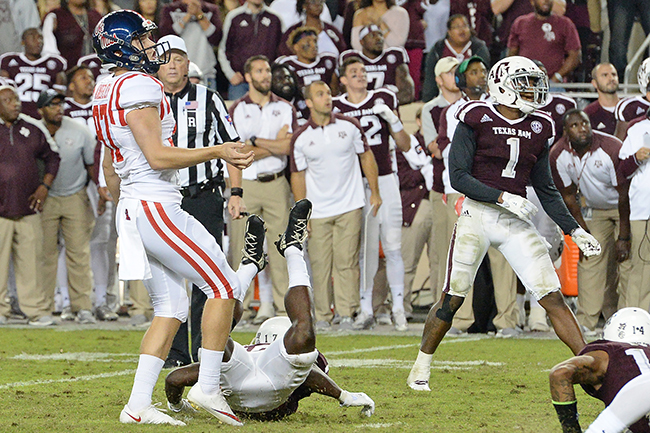 Gary Wunderlich stated two weeks prior that he had not yet been in a situation where a game’s outcome fell at his feet, or foot. Fast forward to last Saturday in College Station, Texas where Wunderlich stood on Kyle Field, facing a 39-yard field goal to put the Rebels up 29-28 over then-No. 8 Texas A&M and a chance to steal a victory.

The moment was not too big for Wunderlich as he converted the kick, sending freshman quarterback Shea Patterson off with a win in his debut game and putting Ole Miss within one game of bowl eligibility.

“With about five minutes left, I kind of decided it was going to come down to a kick,” Wunderlich said. “So, mentally, I got ready and just did my normal warmup of kicking into the next. We went out there and got the job done.”

The kick, along with two other field goals and punting average of 40.5 yards, earned Wunderlich the Southeastern Conference Special Teams Player of the Week honor along with Patterson, who was named the SEC Freshman of the Week. To the viewing audience at home, the kick appeared to flirt with the right goal post toward the end, but Wunderlich put just enough on it to get past and in.

“I didn’t hit it very well,” Wunderlich said. “It kind of went off my toe. I thought I had missed it right, too. But it kind of hooked back in. I was very nervous when I first saw it come off my foot. I was relieved.”

What allowed Patterson to have the success he did against Texas A&M came down to the play of his offensive line, which was the epitome of the walking wounded all night and has been all season.

Robert Conyers and Sean Rawlings each played through injuries that have nagged them all season. Conyers was rolled up during the game and had to come out while Rawlings struggled but played the final 18 snaps at center to bail out Conyers and allow Javon Patterson to move back to his natural spot at guard.

“Robert was trying to get us through the game and really didn’t need to play,” Freeze said during his weekly press conference Monday. “He got his ankle rolled up, and Sean came in to finish the game. Sean is gimpy still. … I really think the real heroes offensively are Robert and Sean. To have those two bail us out and really allow us to play Javon back to guard throughout the game was heroic, and we owe them a debt of gratitude.”

Other injuries to come out of Saturday’s game were defensive back Tony Bridges, who pulled a muscle in his lower back, and defensive lineman Issac Gross, who strained his neck and missed the second half. Freeze felt both would be OK but will wait to see how this week’s practices go before making a status call for the Vanderbilt game.