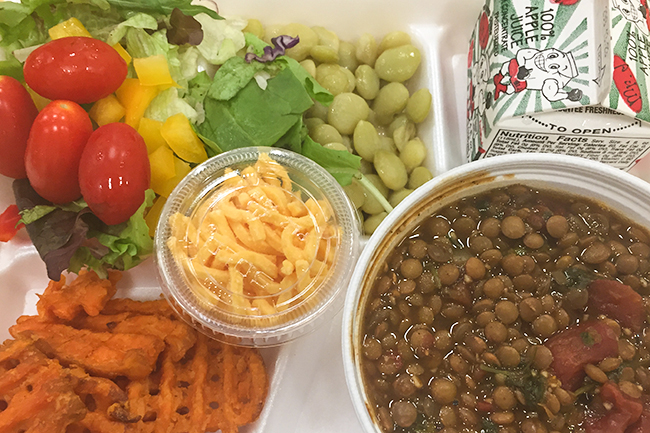 Thanks to the Child Nutrition Department and Good Food for Oxford Schools, Oxford School District students are now being offered menu items that rival most restaurants on the Square.

“Our mission is to use farm-to-school principles to bring local food into the cafeteria and educate children and families about eating healthier,” said Good Food for Oxford Schools Program Director Eleanor Green.

Good Food for Oxford Schools was formed in 2011 and works under the umbrella of the Child Nutrition Department. They work closely with each cafeteria staff and parents to create the school’s menus. GFOS also facilitates educational lessons in the classroom in all grades to help teach students about making healthier eating choices and general nutrition.

Green said 85 percent of OSD lunches are made from scratch.

“Last year we were at about 75 percent,” she said. “We’re moving away from heat-and-serve food.”

The group started planning the winter menu in June.

“We worked on the menu with cafeteria managers, my team and with a lot of input from parents,” she said.

Ideas were garnered through Mississippi Recipes for Success and Lunchbox.org websites and the USDA Food and Nutrition’s cookbook from the Let’s Move Foundation where children submit recipes.

“Some are our new items were created by students,” Green said.

Green said parents have been telling the school district for some time that they wanted more options for lunch.

“We are trying to encourage kids to try different things beyond pizza and nuggets,” she said.

Some parents have expressed concerns that the new menu is too “fancy,” and that young children won’t eat lunch.

While students in first through 12th grade have alternative options to choose from other than the main menu each day, they can also elect to bring lunch to school.

However, kindergarten students do not have other options to choose from other than the main menu.

“That was a choice made at the district level,” Green said. “Young children can experience food anxiety if given too many choices.”

The prekindergarten program at Bramlett Elementary is funded through Head Start and they require all students to eat the food at the cafeteria. Students cannot bring lunch from home unless a doctor’s note is provided due to allergies.

However, comments made on a recent post on the Oxford Mom & Tots Facebook page commended the district for giving students more options and the opportunity to try new foods.

Green said there’s no such thing as “kid food.”

“Children’s palates haven’t been developed fully at a young age,” she said. “They have to be exposed to new foods seven times to determine if they like something. We want to get away from the thinking that certain foods are ‘kid foods.’ Elementary-aged children are the perfect age to start teaching them to make healthy food choices which can make a difference in their health for the rest of their lives.”

Students were asked to write down one thing they liked and didn’t like about the new food options last week or make suggestions for something they’d like to see on future menus.

“We got some really sweet letters,” Green said. “One student asked for hummus Another wanted root beer with a turkey sandwich, an apple and a cookie. It’s nice for them to feel like they have a voice.”

Sweet potatoes take a dominate role in the winter menu due to the accessibility of the locally-grown produce.

“Sweet potatoes are the No. 3 crop grown in Mississippi,” Green said. “It’s very healthy, locally grown and kids love them.”

Each school has a garden that is used mostly for educational purposes. However, on occasion, a garden will produce enough food to be able to be served up to students.

This week, Della Davidson will hold a Sweet Potato Harvest day, where sweet potatoes from the school’s garden will be served at lunch on Friday.

“They grew enough this season to be able to put them on the menu for every Della Davidson student,” Green said.

A committee is being formed currently to work on the spring menu, Green said.

“One of our goals is to feature a vegetarian and meat entree each day,” she said.

The OSD breakfast and lunch menus are available to view online at http://www.oxfordsd.org.