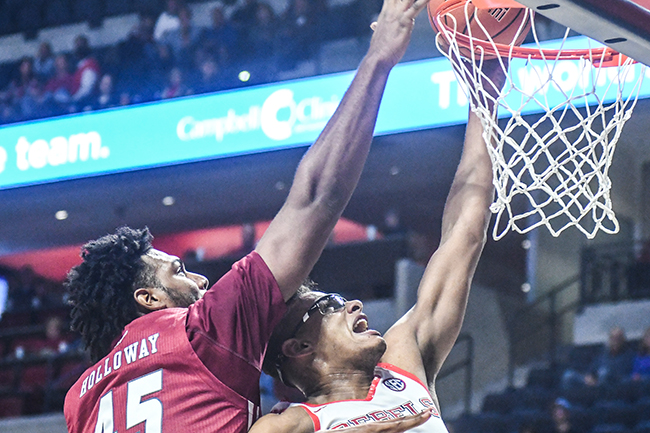 Sebastian Saiz was a force Monday.

But Ole Miss’ senior forward just needed a little finesse to finish it off.

Saiz’s tip-in with 3.3 seconds left proved to be the difference as Ole Miss rallied for a 90-88 win over UMass at the Pavilion. The Rebels scored the final 11 points to erase a nine-point deficit in the final 4 minutes, pulling out another close victory after holding off UT-Martin for a three-point win in their season opener Friday.

“I hope we improve and we get better because I cannot do this every single game,” Saiz said with a smile.

Saiz, who fouled out of the opener with just five points and three rebounds, finished with 22 points and a career-high 19 rebounds for his 10th career double-double. Cullen Neal had 21 points, Terence Davis added 13 points, Deandre Burnett finished with 12 points and Rasheed Brooks chipped in 11.

Neal saved the Rebels (2-0) from disaster when he knocked the ball off Luwane Pipkins’ foot and out of bounds after Pipkins stole Brooks’ inbounds pass and drove in for a go-ahead basket with 36 seconds left. Burnett let the clock tick below 10 seconds before taking off down the right side of the lane and putting up an off-balance layup that Saiz cleaned up.

“I saw my guy go to help, and (Burnett) wasn’t making layups during the game,” Saiz said. “I just kind of knew the ball wasn’t going to go in, and I was right there to tip it in.”

Said Ole Miss coach Andy Kennedy, “He stepped up big for us when we were struggling across the board with 22 and 19. Had a huge tip and put us in control to get out 2-0.”

Saiz was the last player to score at least 20 points and pull down at least 15 boards for Ole Miss when he did it in January against Alabama.

“I just came from a bad day the other day,” Saiz said. “I was just trying to get them all.”

The Rebels committed 17 more turnovers and have 41 through their first two games, which contributed to a choppy game that was difficult for Ole Miss to find any sort of rhythm. The teams were called for 54 fouls and combined to go 56 of 82 from the free-throw line.

“It’s not them,” Kennedy said of the officials calling a lot of fouls. “They’re following the mandate. We have to adjust, both teams. Basketball has to adjust. If this is how you’re going to call it, we have to adjust.

Ole Miss also had to deal with the hot hand of the Minutemen (1-1), who were 13 of 26 from 3-point range at one point and led 88-79 with 3:49 left despite being outscored 38-20 in the paint. But UMass missed its final seven attempts from long range, and Ole Miss made its move with Burnett’s floater tying it with 1:08 left to set up the final sequence.

The Rebels led 34-24 midway through the first half, but UMass got hot while Ole Miss cooled off. The Minutemen eventually tied it at 38 and ended the first half on a 24-6 run to take a 48-40 lead at the break on the strength of nine 3-pointers.

“I thought they did a good job of moving the ball,” Kennedy said. “We had a few scouting report errors, but give them credit. They made shots.”

The Rebels shot just 30 percent from the floor in the first half but connected on 55.6 percent of their shots in the final 20 minutes.

“When we got aggressive at the end, it allowed us to win the game,” Kennedy said.

Next up for Ole Miss is Oral Roberts on Friday at 2 p.m. in the Paradise Jam in the Virgin Islands.