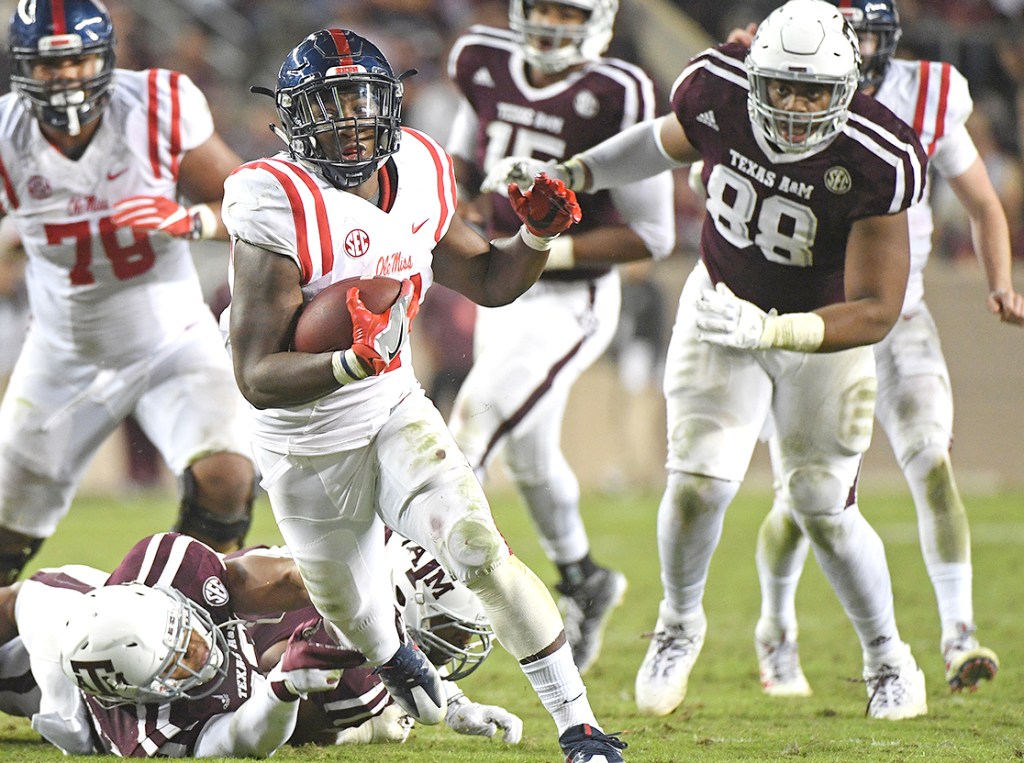 Once Chad Kelly went down, Ole Miss ended up turning the offense over to freshman Shea Patterson.

But the Rebels’ coaches let senior running back Akeem Judd know it was time for him to step up his game.

“I think he’s been solid all year, but I wanted him to take a little bit more of the burden on his shoulders to say, ‘Hey, you know what, I’ve got to do a little more,'” running backs coach Derrick Nix said.

Judd has responded, helping not only his young quarterback but also a running game that’s once again spent most of the season stuck in neutral even with Kelly leading the Southeastern Conference in passing before a torn ACL two weeks ago ended his collegiate career.

Judd has put together back-to-back 100-yard games for the first time in his career. He finished with 100 on 20 carries last week at Texas A&M, including a shifty 21-yard touchdown run that was part of the Rebels’ 23-point fourth quarter in their 29-28 comeback win.

Some of his newfound success has to be credited to an offensive line that’s holding things together despite its laundry list of injuries, but a plea from coaches to play to his strengths has also benefited the 224-pounder, who ran for a career-high 139 yards the week before against Georgia Southern and is averaging nearly 5 yards a carry for the SEC’s 13th-ranked rushing offense.

“We challenged him as an offensive staff probably about four or three games ago to be the one-cut, downhill, physical presence we need in this offense, especially down the stretch,” Nix said. “He’s been getting better and better every week at that. … He showed up (against A&M), and the week before that he showed up. Just looking for more things from him going forward.”

Ole Miss has gone two straight games with the same starting combination at linebacker, something of note considering it’s the first time all season that’s happened at a position that’s been in constant flux.

Defensive coordinator Dave Wommack said he’d like to finish out the season with Rommel Mageo in the middle and DeMarquis Gates on the outside. Gates leads the Rebels with 70 tackles despite playing most of the season with a nagging knee injury. Mageo’s inconsistency has had him shuffling in and out of the lineup, but he’s combined for 17 tackles the last two weeks.

“There’s no continuity (at middle linebacker), and we just finally decided we’re going to put Rommel there and let him go and move Gates back outside,” Wommack said. “We’ve gotten some reps with some guys that are going to be in the game and trying to be more consistent with that.”

As for Gates’ injury, Wommack said it’s something the junior has decided to play through the rest of the season.

“I know it’s bothering him,” Wommack said. “He’ll have to handle it after the season, but he’s doing a good job. He’s going as hard as he can.”

Running back Eric Swinney had another season end prematurely when he tore an ACL on his first collegiate carry against Florida State.

Nix said Swinney’s rehab is going well and that the freshman is in line to make a full recovery. Swinney redshirted last season after suffering a stress fracture in his leg during the preseason.

“Getting good checkups from Pat Jernigan, our trainer,” Nix said. “He’s well on schedule to be back. I see him every day but saw him actually working out some. He looks fine.”