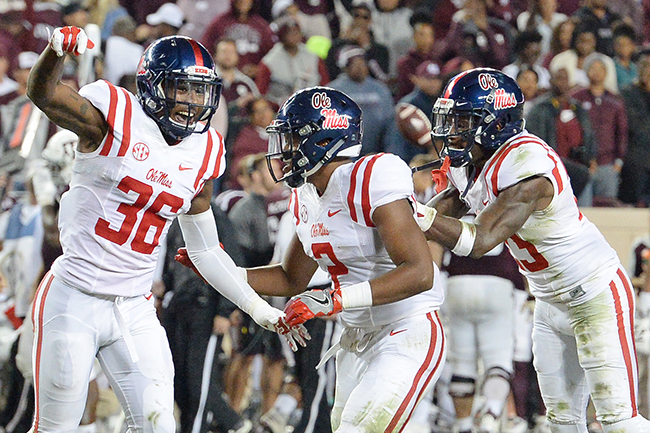 Ole Miss defensive back Deontay Anderson (2) celebrates his interception to seal the win with Zedrick Woods (36) and Carlos Davis (23) against Texas A&M.

The prognosticators all believe Ole Miss is going bowling. They just don’t agree on where.

The latest bowl projections nationwide have the Rebels traveling as close as Memphis or as far as Charlotte, which is another way of saying they’re all over the map.

College Football News’ Pete Fiutak has Ole Miss in the Belk Bowl against Pittsburgh, a team the Rebels met in a bowl four years ago.

Bleacher Report predicts a trip to Nashville, Tennessee for the Rebels to play in the Music City Bowl against Indiana. Ole Miss last played in that bowl in 2013.

SB Nation’s projections as well as those of Fox Sports’ Stewart Mandel have Ole Miss in the Independence Bowl. SB Nation has the Rebels going up against Middle Tennessee State while Mandel has Ole Miss playing N.C. State. MTSU landing here would mean the Atlantic Coast Conference didn’t fill all of its bowl slots since the league has a tie-in to this game.

Of course, Ole Miss (5-5, 2-4 Southeastern Conference) has to win another game before worrying about a bowl. The Rebels are at Vanderbilt on Saturday (7 p.m., SEC Network) before ending the regular season Nov. 26 at home against Mississippi State.

Winning both would increase Ole Miss’ chances of spending the postseason in a game other than the Liberty Bowl. If the Rebels win just one, it’s hard to see them ending up anywhere other than Memphis, a city that would lobby hard for Ole Miss with its close proximity and large contingent of fans and alumni.