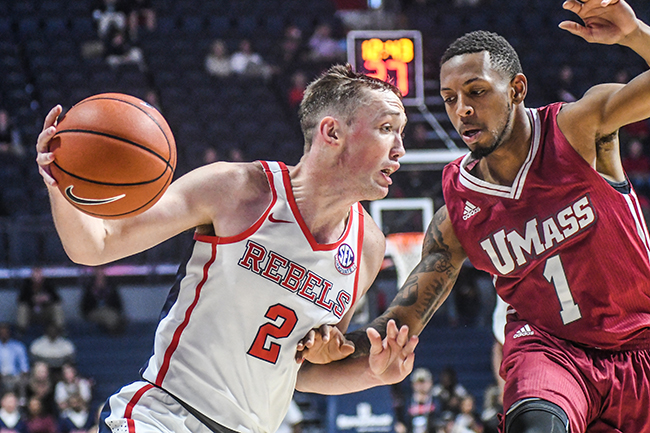 Ole Miss’ men’s basketball team has a chance to notch some quality wins off the mainland this weekend.

The Rebels will compete in the Paradise Jam in the U.S. Virgin Islands starting Friday. Ole Miss opens the tournament against Oral Robert at 2 p.m. CT and could meet St. Joseph’s, which is 88th in the latest KenPom ratings, in the second round Sunday with a win.

N.C. State and No. 22 Creighton are other KenPom top-100 teams in the field. Ole Miss would have to advance to Monday’s championship game to have a chance to face either one, but the Rebels are feeling good about themselves as one of six unbeaten teams in the tournament.

The Rebels’ wins over Tennessee Martin and UMass didn’t come without caveats.

Both were one-possession games with Ole Miss needing Saiz’s putback in the waning seconds to escape against UMass on Monday. It capped an 11-0 run in the final 3 minutes, 46 seconds to give the Rebels a 90-88 come-from-behind win, but Ole Miss coach Andy Kennedy wants his team’s sense of urgency to kick in much sooner with the quality of competition increasing.

“I know what I’ve seen (in practice),” Kennedy said. “I see a team that is much grittier, much grimier, much tougher than what I’m seeing in these games. That’s got to improve or we’re not going to be who we are, and that’s who we are and how we’ve got to play.”

Turnovers continue to be a problem for a team that’s still shuffling through lineups in the early part of the season. Ole Miss committed 17 against UMass and has 41 for the season after piling up 20 in an exhibition win over Morehouse, something that’s in contrast to the way the Rebels protect the ball in practice, Kennedy said.

“From the naked eye, I’m looking at it like a fire sale where I am,” Kennedy said. “I’m thinking, ‘What in the world are we doing?’ Because I know what we practice, and I just don’t see it transfer over. But it looks like we’re just not comfortable.”

That will have to change if the Rebels want to play in the winner’s bracket this weekend.

“That’s maybe our biggest problem,” Saiz said. “Turnovers and not dealing with pressure, so we’ve got to fix it.”