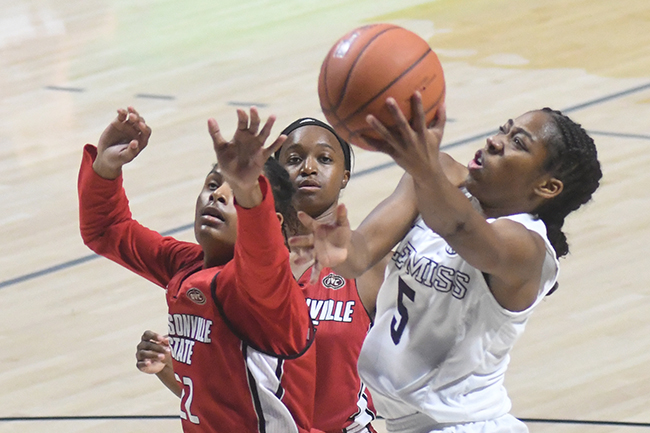 Ole Miss' Erika Sisk (5) shoots as Jacksonville State's Destany McLin (22) and Lacey Buchanon (23) defend at the Pavilion at Ole Miss in Oxford on Thursday. Sisk led all scorers with 15 points in the Rebels' 68-50 win. (Bruce Newman)

Matt Insell isn’t about to apologize for the kind of win his Ole Miss women’s basketball team got Thursday.

It wasn’t easy for Ole Miss to stay unbeaten as the Rebels overcame a slow start to pull away for a 68-50 win over Jacksonville State at the Pavilion. Ole Miss (3-0) trailed for most of the third quarter but went ahead 42-41 on a 3-pointer from Shandricka Sessom that sparked a 17-2 run to put the Rebels in control for good.

“Hey, I’ll take 20 more of those just like it,” said Insell, whose fourth Ole Miss team is trying to make last year’s last-place finish in the Southeastern Conference a distant memory. “I’m glad to be 3-0 because I’m going to tell you something, we’ve been beat in these games the past couple years. We’re glad to get that one.”

Oxford native Erika Sisk led five Rebels in double figures with a game-high 15 points. Taylor Manuel and Shequila Joseph each had 13 points, Madinah Mahammad scored 12 points and Sessom added 11 for Ole Miss, which led by as many as 21 in the fourth quarter.

Tyler Phelion came off the bench to lead Jacksonville State (1-2) with 11 points.

Ole Miss shot just 41 percent (23 of 56) from the floor with Manuel, the Rebels’ 6-foot-4 center, saddled with foul trouble in the first half, but the Rebels held Jacksonville State to 31 percent shooting, including just 27.3 percent (3 of 11) in the fourth quarter.

Ole Miss made it a point in the second half to work the ball inside to Manuel, who had all of her points in the final two quarters after playing just four minutes in the first half because of two quick fouls. Manuel finished 5 of 11 from the floor and had three assists when double teams left shooters open late.

“Our ticket to the NCAA Tournament is going to be going in to Taylor Manuel,” Insell said. “We’ve got to realize that. We’ve got to know that, and our kids are doing great job with that.

“It’s hard to guard her. I don’t care who we’re playing. You’re going to have to double her. She’s so big and she’s so active in there that you’ve got to double her, and when that double comes, our shooters have to be ready to shoot the ball.”

Jacksonville State started 1 of 17 from the field, but Ole Miss wasn’t much better. The Rebels not only struggled to hit shots with Manuel on the bench for most of the first half but committed 11 of their 15 turnovers in the first two quarters and trailed 29-27 at the half before finding their rhythm late.

“We just kept playing, and our energy defensively got better,” Insell said.

Ole Miss will stay home Sunday to take on High Point at 2 p.m.