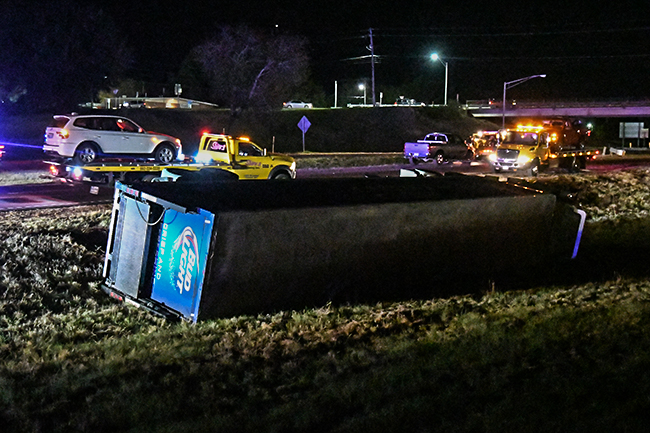 A fully loaded Bud Light truck sits off the side of Highway 6 west just east of the South Lamar exit on Thursday, November 17, 2016. Four vehicles were involved in the wreck.

According to the Oxford Police Department, the driver of the Bud Light truck swerved to the right to avoid hitting vehicles that had stopped suddenly in front of him.

Maj. Jeff McCutchen said a car traveling west on West Jackson just east of the South Lamar Boulevard exit at about 5:30 p.m. stopped suddenly when traffic was slowing down for the traffic light at the West Jackson and Highway 6 intersection. A vehicle behind the first car veered to the left but clipped the first car while a third car stopped short to avoid hitting the first two cars.

“The driver of the 18-wheeler saw what was going on and tried to veer onto the shoulder to avoid the collision but he went a little too far and turned over,” McCutchen said.

The driver was sent to Baptist Memorial Hospital-North Mississippi for precautionary measures with minor injuries. No one else was injured.

McCutchen said the road was reopened at 12:30 a.m.

There were 15 wrecks in Oxford on Thursday with five on Highway 6 between South Lamar and West Jackson Avenue.

McCutchen said the other wrecks were minor and there were no major injuries reported.

OPD will be increasing its patrols starting today, McCutchen said, on roads and in neighborhoods.

‘This is the time of year when burglaries increase since many people leave town for the Thanksgiving holiday,” he said. “It’s the optimum time for mass burglaries. So we’ll have extra officers on foot patrol in neighborhoods and in vehicles patrolling those streets where a lot of students tend to live.”

OPD will also beef up enforcement efforts on the road, he said.

“We’re going to be roads making sure people are staying off the phones, driving sober and staying safe this holiday,” McCutchen said.