Oxford, Lafayette to move up in classification starting in 2017 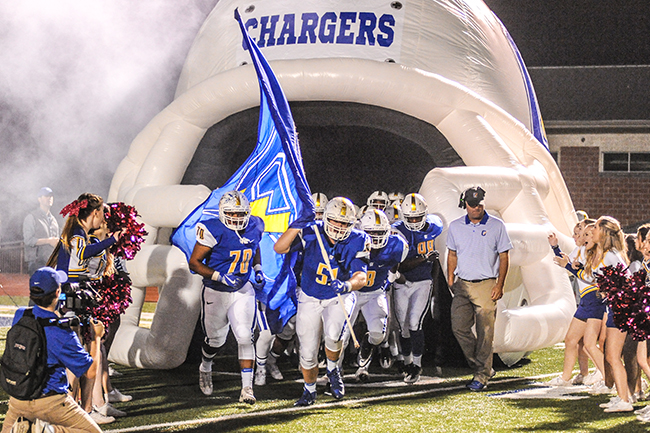 What has been the talk around town for a while now has finally become official. The Mississippi High School Activities Association announced the new classifications for 1-6A Thursday morning with Oxford and Lafayette learning their fate. The Chargers will jump into the big pond that is 6A while Lafayette moves up to 5A. The move will start next August at the beginning of the new high school athletics calendar. The moves will be from 2017-19 before a new census will take place to see if realignment is needed again.

Oxford’s new home will be Region 1-6A in cross-country, football, powerlifting and soccer while basketball will reside in Region 2-6A. After winning the Class II state championship last month, volleyball moves up to Region 2-Class III. Swimming will stay in Class II.

New region alignments for baseball, track & field and fast pitch softball had not been announced by the MHSAA as of yet.

Oxford’s new region opponents in football will be Columbus, Desoto Central, Hernando, Horn Lake, South Panola, Southaven and Tupelo. In basketball, Oxford will join Columbus, South Panola and Tupelo in Region 2. Soccer will share the same region opponents as basketball in Region 1-6A. It will be a crowded region meet for cross-country as the Chargers join nine other schools. Columbus, Desoto Central, Greenville, Hernando, Horn Lake, South Panola, Southaven, Starkville and Tupelo all make up Region 1-6A.

For the first time in school history, Lafayette will be making the move up to Class 5A. The Commodores will reside in Oxford’s current region of 1-5 starting next year, joining Center Hill, Grenada, Lake Cormorant, Lewisburg, Olive Branch, Saltillo and West Point.

“We’re excited about it,” Lafayette athletic director Gary Drewery said. “We’ve been preparing for the last three years to move up. There’s a lot of things to be prepared. There’s a lot of things that has to take place. We’ve been working in that direction, getting new coaches and adding three more sports. We addressed it at the middle school level more than anything.”

Basketball will be in Region 2-5A along with Grenada, Saltillo and West Point. Soccer is also Region 2-5A with Cleveland, Grenada and Saltillo. In volleyball, the Commodores remain in Region 4-Class II with Amory, Caledonia, New Hope and Pontotoc.

Water Valley remained in Class 3A, but Region 2 will have a little different look to it next football season. Gone is perennial region champion Charleston as they moved to Region 3, as Coahoma AHS replaces them. Holly Springs, Independence, M.S. Palmer, North Panola all remain. Basketball will have the same region opponents as football. Volleyball stays in Class I but moves from Region 2 to Region 3. Joining the Blue Devils will be Aberdeen, Choctaw County, M.S. Palmer and West Lowndes.