Oxford, West Point renew rivalry for 5A North Half berth 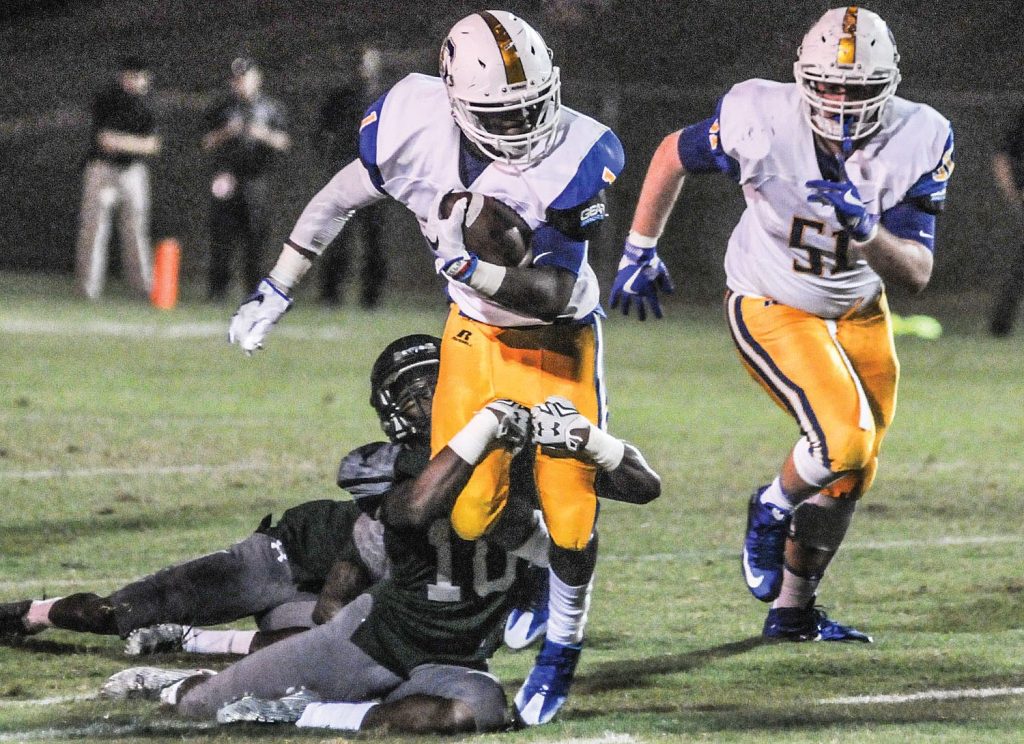 Oxford’s Hiram Wadlington (1) is tackled by West Point’s Ryan Melton (10) in West Point on Sept. 23, 2016. West Point won 22-8, but the region rivals will square off again Friday at Oxford’s Bobby Holcomb Field in the MHSAA Class 5A quarterfinals. (Davis Potter)

Death, taxes and an Oxford-West Point playoff game. Those are three things most people can start to count on happening every year.

Friday night, the latter happens once again as Oxford hosts Region 1-5A rival West Point at Bobby Holcomb Field in the MHSAA Class 5A quarterfinal round (7 p.m., 95.5 FM).

The winner will face either fellow 1-5A opponents Clarksdale or Lake Cormorant in next week’s North Half championship game.

“Hopefully, in the North of 5A, that’s what you want it to come down to is Oxford and West Point,” Oxford coach Chris Cutcliffe said after Oxford’s 34-16 win over Grenada in last week’s first round. “That’s what it’s been the past few years and now we get another round of it.”

Since 2005, the Chargers (8-4) and Green Wave (11-1) have met six times in the playoffs. West Point won the first four meetings, but Oxford is riding a two-year winning streak, including last year’s 35-7 win in the North Half title game.

During their annual regular-season matchup, the Green Wave defeated Oxford 22-8 on Sept. 26 at home en route to a perfect 7-0 record and a Region 1-5A championship. The Chargers were one of the few teams to play a competitive game against West Point during regular season as the 14-point loss was the third-closest margin of victory for the Green Wave.

“We certainly have gone back and looked and restudied that film,” Cutcliffe said of the regular-season game. “To pick out things that worked well and things that we could change this week and do a better job of. Hopefully we can capitalize on those mistakes that we made the first time by getting them corrected before Friday.”

Oxford was held to 116 total yards of offense by West Point’s defense two months ago as quarterback John Reece McClure completed 13 of 24 passes for 86 yards and Hiram Wadlington accounted for 31 of the Chargers’ 30 net rushing yards. McClure had a loss of 35 yards in the game. On the other side of the field, West Point quarterback Clayton Knight went 6 of 14 for 50 yards and one interception while running back Marcus Murphy had 15 carries for 169 yards and two touchdowns. After suffering a loss to Starkville in the third week of the season, West Point is riding a 10-game winning streak.

“(West Point) has certainly gotten better as the year’s gone on,” Cutcliffe said. “They’re a great football team that’s gotten better every week. They have a lot of talented players that have more experience, more games under their belt. It will certainly be a big challenge for us.”

With the way the playoff format works under the MHSAA, not every team who had a good season or finished at the top of their region is guaranteed home-field advantage throughout the postseason. That rings true this week as the No. 1 seed Green Wave must travel to No. 3 seed Oxford after defeating Holmes County Central 41-7 in the first round. After going on the road against Grenada, Oxford gets to enjoy home-field advantage in a crucial time of their season.

“We’re certainly happy to have this game at home,” Cutcliffe said. “To be honest, I’m not particularly loving that rule the way that works out, but it works in our favor this time. We have them at home, which is a good thing, but either way it’s going to come down to which team can execute the best and protect the football.”