Lafayette runs past Amory for a 4A north half title berth 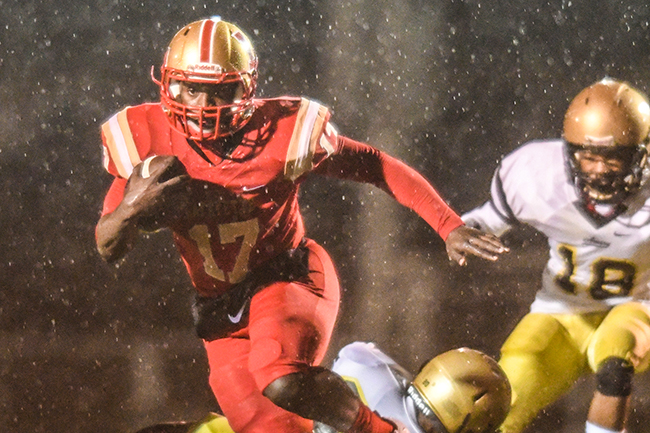 Not even the weather could stop the Commodores on Friday night, as they defeated the Amory Panthers 51-13 in a stormy affair. Most of a large Lafayette crowd at William L. Buford stadium cleared out after a lightning delay that lasted over an hour, but the Commodores were unfazed by the conditions. The win sends Lafayette into the 4A north half championship where they will host Pontotoc, who defeated reigning 4A champion Noxubee County 29-20, next week.

The weather made for a sloppy game. With the wind and rain, it was a difficult day for passing, but lucky for Lafayette (11-2), their offense, centered on a strong running attack, was the perfect system for the situation.

“Real proud of us,” Lafayette head coach Michael Fair said. “Schedule changes like that, you never know how they’re going to respond to that. Really executed the game plan at a real high level in that weather, I thought that was huge.”

The Commodores only passed five times, as after their first possession they found a groove on the ground and had no reason to try and force the ball into the air with the troubling weather conditions. Running back Jamarcus Quarles rushed for 153 yards and two touchdowns on 17 carries, while fellow back Jamie Shaw went for 108 yards and two touchdowns on just nine carries. Despite the lack of passing attempts, quarterback Will Ard was still able to make an impact on the game with an eight-yard touchdown run.

“The box was just packed full of people, and we ended up spreading them out a little bit and finding some running lanes and our backs, they can make something exciting happen,” Fair said.

The Commodore defense struggled on the first drive of the game, allowing a touchdown, but buckled down and blocked the extra point and made the rest of the game miserable for the Panther’s (11-3) offense. After the first score they stepped up to force two consecutive turnovers on downs, both leading to Commodore touchdowns, and added a safety in the third quarter.

“After that first series, I thought our guys really tackled well, ran to the ball,” Fair said. “Coach (Ben) Ashley is doing a tremendous job and I felt like we had a great game plan for tonight.”

Randy Anderson continued his prolific freshman campaign, using his speed to run out of the wildcat formation and racking up 120 yards and a touchdown on just eight carries.

“I think he just changes the whole deal,” Fair said. “He’s just an added element to our offense. We have an identity as a run physical football team, and then we put him back there, and he can score any time he touches it. We spread our guys out and our offensive line really does a good job blocking, and he gets a crack and he’s electric.