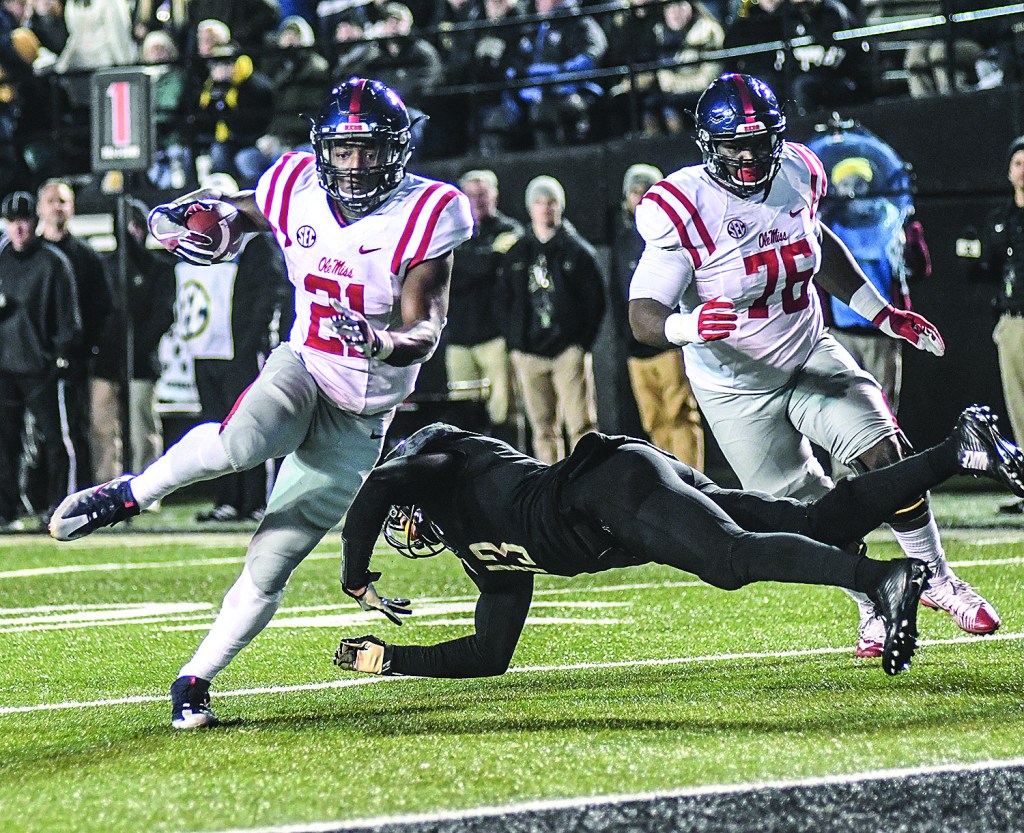 NASHVILLE, Tenn. — Shea Patterson’s encore performance after last week’s dazzling game against Texas A&M looked to be more of the same, for two drives at least. The freshman quarterback was pressured all night, did not look comfortable in the pocket and Ole Miss suffered for it, falling to Vanderbilt 38-17 at Vanderbilt Stadium on Saturday night.

The loss puts Ole Miss (5-6, 2-5 Southeastern Conference) on the brink of missing a bowl game for the first time under Hugh Freeze’s tenure with one more game, the Egg Bowl with Mississippi State, left to play next week.

“(Coaching) is a brutal roller coaster on you and your family and the young men that you work with,” Ole Miss head coach Hugh Freeze said after the loss. “This is a great example of it. The last two weeks, the emotional highs, winning on the road, and the disappointment of being out-coached tonight. (Vanderbilt) wanted it more in every facet of the game.”

Patterson and the Rebels got off to a quick start using a field goal from Gary Wunderlich and a 21-yard touchdown pass from Patterson to running back Akeem Judd for the quick 10-0 lead early in the first quarter. The touchdown occurred after Carlos Davis recovered a muffed punt by Vanderbilt’s Darrius Sims.

From there it was all Vanderbilt (5-6, 2-5), who rattled off 31 unanswered points thanks the play of returning running back Ralph Webb and the Vanderbilt receivers helping out quarterback Kyle Shurmur. Webb was battling a high ankle sprain in recent weeks but returned fully this week. He did not gouge the defense for massive numbers, but his production as he scored three rushing touchdowns on 20 carries for 123 yards. Sims, Khari Blasingame and Dallas Rivers combined for 99 yards on 21 carries. Shumur accounted for two touchdowns, completing 17 of 30 passes for 273 yards. He came into the game with five touchdown passes on through his first 10 games.

“You give up explosive plays and you can’t stop the run, you’re not going to be anybody,” defensive coordinator Dave Wommack said. “That’s what it seemed like we did, especially in the second half. We just got to find a way to fix those things.”

Patterson ended the night completing 20 of 42 passes for 222 yards and two touchdowns in his second career start. The second touchdown was a 39-yard pass to tight end Evan Engram, who bobbled it but came down with the ball in the end zone, on the second play of the fourth quarter to make it a 31-17 game with a little under 15 minutes left in the game. Running back Akeem Judd was the Rebels’ lead rusher, carrying the ball 10 times for 63 yards. He also finished with 34 yards on three receptions and a touchdown. Engram was the lead receiver with 102 yards on six catches and a touchdown.

Vanderbilt erased the newfound momentum the Rebels had gathered as Shurmur hit Bailey McElwain from three yards out for the winning margin midway through the fourth quarter. The Commodores out-paced Ole Miss offensively, racking up 481 yards of total offense to the Rebels’ 363.