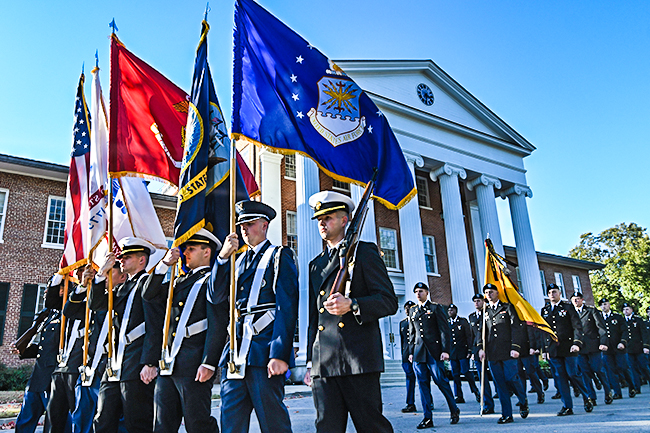 The annual Pass in Review ceremony began at 3 p.m. in the Lyceum Circle. Vitter, who became chancellor in January, also delivered the keynote address.

“It is an honor to be standing here today amongst a group of heroes, our students who have put aside their personal interest for the sake of serving something larger than themselves,” Vitter said. “The University of Mississippi and our ROTC programs have a long and proud heritage of service to our university, state and nation. I applaud you – cadets and midshipmen – for upholding that proud legacy.”

Vitter also thanked all veterans present who answered the nation’s call in a time of need.

Historically, the review of unit readiness and discipline incorporates an inspection. The formation marched past a reviewing stand where VIPs and the senior officer or dignitary were seated.

Army ROTC alone has commissioned some 1,740 officers since its inception at Ole Miss in 1936. Many of them have fought honorably through six wars, including World War II, the Korean War, Vietnam, Desert Storm, Afghanistan and Iraq.

In the university’s Navy/Marines ROTC program, about 400 midshipmen have been commissioned since the unit’s inception, including U.S. Sen. Thad Cochran (R-Miss.), Rear Adm. and former Commander of Navy Personnel Command Edward Masso, and U.S. Secretary of the Navy and former Mississippi Gov. Ray Mabus.

Since assuming command in June 2015, Capt. Brian Goszkowicz has supervised the commissioning of seven midshipmen.

The Pass in Review has a long history in the military and at UM. The campus event had been conducted annually since the inception of the ROTC programs, running through the late 1990s. ROTC was established at the university on March 11, 1936.

On Aug. 6, 1964, a distinctive unit insignia was authorized for wear by UM ROTC cadets. The insignia consists of a shield of red and blue and a bend of gray. A likeness of a rifle, a magnolia blossom and the Lyceum identify the unit with national defense, the state of Mississippi and the university.